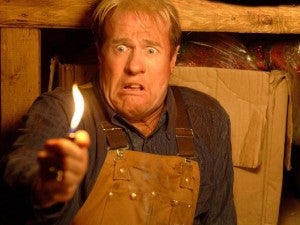 He didn't specify what role he'll be playing, and it probably won't be officially released anytime soon given how secretive Marvel is and how much Gunn seems to enjoy his little sci-fi superhero movie that could chugging along fairly under the mainstream media radar.

Lest there be any concern that the actor wasn't supposed to announce before he left, though, Gunn almost immediately tweeted Henry's message back out to the world.

Henry has also worked with Marvel Cinematic Universe mastermind Joss Whedon on both Dollhouse and Firefly. He also once starred in Payback, a Mel Gibson film based on Richard Stark's Parker novel The Hunter. That book has since been adapted into an award-winning graphic novel by Darwyn Cooke.

This is the second familiar face from TV (Henry has done The Killing and Bunheads, among many, many others) to enlist for Guardians of the Galaxy in the recent past; Djimon Hounsou of Alias fame recently signed on to play Korath.