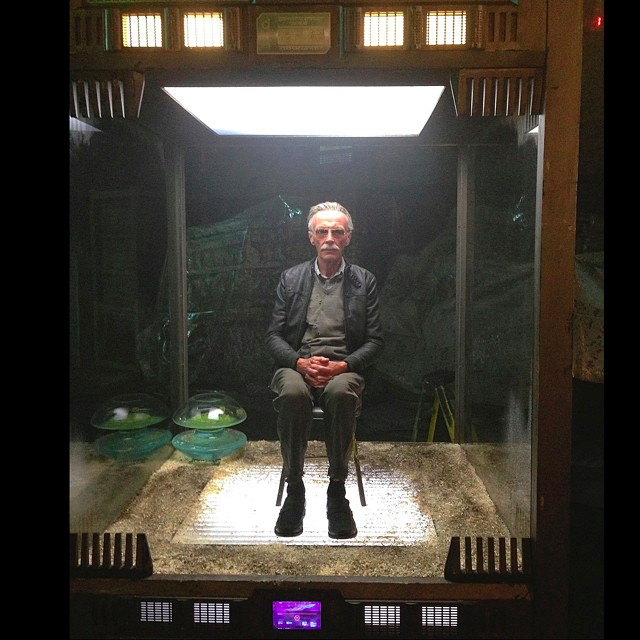 Since production wrapped on Guardians of the Galaxy, director James Gunn has repeatedly emphasized for fans and reporters that Marvel Studios let him make his movie, his way, and that nothing of substance had been changed along the way.

So, of course, this weekend when he finally admitted something NOT of substance that had been changed -- the exact nature of the Stan Lee cameo -- the story went viral.

So for today's #GOTGpicoftheday on social media, Gunn shared the image above, with the caption below:

#‎gotgpicoftheday‬ At a panel on Sunday at Dragoncon, I talked about a deleted @realstanlee cameo in Guardians, and promised the folks there I'd post a photo on Instagram - so here it is! As you can see, this is not Stan, but a double. In the original cut of the film, when the Guardians enter the Collector's museum, Rocket looks over and sees Cosmo the dog in one display case, Quill looks over into another display case and is surprised by a tentacle slapping against the glass, and Groot looks over and sees, in another display case, Stan Lee. In one take, Stan Lee just slowly turns up his finger, flipping off Groot. We shot this footage with a Stan Lee double because Stan wasn't able to come to the UK at the time. The plan was to shoot Stan in the same lighting when I was back in LA, and we'd digitally replace the double's head with Stan's actual head (not quite as difficult as it sounds). Although I thought the cameo was funny, I thought the flipping off joke was too similar to the moment earlier in the film where Quill flips off the Nova Corps, so I excised that part of it immediately. A couple of the guys at Marvel thought Stan Lee in a case was too broad of a joke in general, and that it took the audience out of the movie. I argued about it for a bit, but we ended up not keeping it in the film. In a pretty typical case of Internet-journalism-telephone, articles online yesterday said that Disney forbade the scene because of standards . However, that's incorrect - no one at Disney ever even saw the scene, and it was cut solely for creative reasons. ‪#‎gotg‬
‪#‎guardiansofthegalaxy‬

From that same convention, he also shared a video of himself dancing with a cosplayer dressed as Baby Groot -- which, of course, tied into his and his brother's massive "Grooting" session at the show.

You can check that out below.