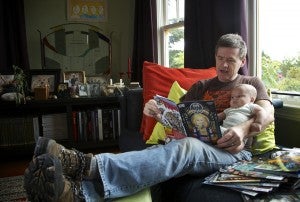 Not long ago, ComicBook.com reported on the story of Razor Sheldon, a Redditor who, moved by the inspirational story of comic book creator Karl Kesel's adoption of a child born with drug addiction, decided he'd like to help. Kesel was selling off his extensive Silver Age comics collection in order to be able to afford his new son, and the medical care Isaac required--and Sheldon rallied supporters to chip in and buy some of Kesel's own comics back for him, allowing him to lessen the blow of giving up those vital physical reminders of his childhood and early fandom. Well, now that the campaign is over, and raised more than $5,000 for Kesel to buy his comics back, the veteran writer-artist has written a note to his benefactors on the Blastoff Comics website that hosts his collection's sale. According to Sheldon, Kesel will be monitoring the comments thread over the next few days, so supporters and fans who would like to interact with him can check out the Blastoff site and ask him questions. Meanwhile, his remarks are reprinted in full below:

I could go on and on about the amazing people my wife Myrna and I have encountered along our road to adopt Isaac. The counselors and staff at Open Adoption and Family Services, the other waiting families (many of whom are now close friends), the birth mother and father who entrusted Isaac to us, the nurses and doctors who looked after Isaac (and us!) while he was in the hospital, everyone involved with Blastoff Comics— there are a lot of great people out there, all willing to go above and beyond. But I never saw this one coming. Wanting to adopt seemed natural to us. Paying for it by selling the heart of my comic collection was the only way we could afford it, and a sacrifice I was more than willing to make. Didn't have to think twice. But actually, physically letting go of those comics— not easy. Not easy at all. I slowly sorted and re-bagged the comics, remembering how this one thrilled me, this one scared me, how hard I had to search to find that other one. It took a while. And then the stacked boxes sat in my studio for nearly two years. "I gotta sell these," I kept thinking. But the time never seemed right. Not until Isaac was actually in our arms. Not only did I know it was time— I knew I was coming out way ahead in the deal. Of course, the trick to paying for Isaac's bills by selling my comics is that people have to buy those comics. Blastoff has done, quite frankly, a jaw-droppingly good job getting the word out. And people— because there are a lot of great people out there— responded. But never in a million years would it have occurred to me that someone would buy my comics back for me. That they would actually give me money for my comics— money that I could use for Isaac— and then just give those comics back to me. I write and draw superhero stories for a living. I know all about selfless altruism. I know all about long odds and impossible goals and never giving up. Looks like a lot of people do. There honestly aren't words to express how grateful I am for what Razor and company did for me. Because of them I'm able to get back some of the comics that, once gone, I found myself thinking about and missing. X-Men was my first favorite comic, and while I started reading with #49, the earlier Werner Roth issues have always been definitive to me— and I've always been a sucker for the Mimic— so it's a joy to be able to snatch up a good number of them. I was also able to get all the issues of Thor with the Inhumans back-ups (but someone else beat me to the slightly earlier issue where Thor fought the Super-Skrull, darn it!), and the Kirby-drawn debut run of SHIELD in Strange Tales (added bonus: amazing Ditko Dr. Strange as the second feature!). I also scooped up some Steranko SHIELD comics, including #3, which scared me to death when I was a kid! But the high point for me is the return of many, many early issues of Daredevil. The prime reason for this can be summed up in two words: Mike Murdock. For those who don't know: in order to protect his secret identity from being revealed, Matt Murdock claimed that he wasn't Daredevil, his twin brother Mike was! It's the most absurdly wonderful idea in the history of Silver Age Marvel and I love that character and storyline far more than any rational man should. And it was just a symptom of the disease: all the Daredevil stories from this period are just a little… odd. Daredevil disguises himself as Thor?! He's thrown half a second out of sync with our timeline?!? He switches bodies with Dr. Doom?!?! All I can say is: they just don't make comics like that any more. And I am thrilled to get a vary large amount of them back. So thank you, Razor and the crowd who tilted at this windmill with him. There are a lot of great people out there— and that list starts with everyone who helped make this happen. Isaac is the greatest gift I have ever received. This is a very close second. Karl Kesel 9.7.12

Happy Ending: Kesel Responds To Campaign To Buy His Comics