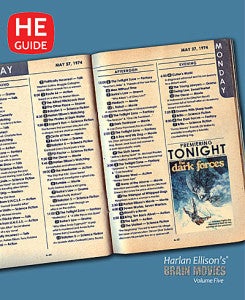 The fifth and most recent volume of Harlan Ellison's Brain Movies books, collecting scripts and teleplays from throughout his long career, features a unique lost gem: his first-ever Batman story, written for Batman '66 and never used on the air.

We hadn't heard about the book--which was released via CreateSpace--until Neil Gaiman just tweeted the obvious: "Harlan Ellison wrote an unbroadcast 1960s BATMAN Two-Face 2-parter? And it is now in print? WHY IS THIS NOT NEWS?"

Well, it is now. Here's the description, per the book's page on Ellison's website:

SEE ELLISON’S FIRST ADVENTURE WITH THE CAPED CRUSADER: Though Harlan’s written numerous comic book scripts for the Dark Knight, his first slide down the Bat-Pole was in 1966 when he pitched an episode to ABC’s Batman, starring Adam West and Burt Ward. Tragically—for reasons explained in the editor’s notes—“The Two-Way Crimes of Two-Face” was never produced, but now you can read what the Unrepentant Harlequin had in mind for the Dynamic Duo and their Bifurcated Foe.

You can pick up a copy here. The 400-page paperback is available only via custom printing.

Ellison, of course, is responsible for over 1,700 works of fiction in a variety of media over the years, including having worked on Babylon 5 with veteran comics writer J. Michael Straczynski.

Thanks to Neil Gaiman for the heads up!