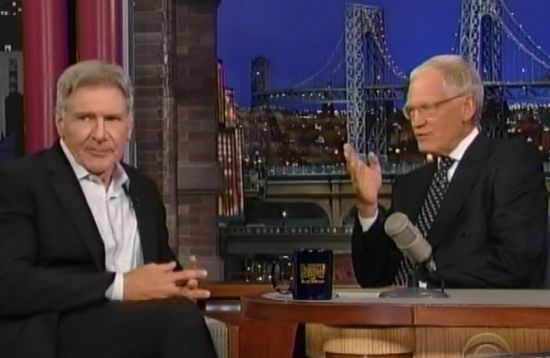 On Thursday night’s Late Show with David Letterman, Harrison Ford appeared as a guest to promote Ender’s Game. Of course, Letterman asked the Star Wars question, which everyone interviewing Ford is required to ask. While Ford didn’t reveal if he actually was going to do another Star Wars movie, he did seem to indicate for the first time that we can recall that he would do one if asked.

In introducing Ford, Letterman talked about how Ford’s movies had made $7 billion. Letterman asked, “What about Star Wars? What about Indiana Jones? Will we be seeing you in anymore Indiana Jones or Star Wars movies?”

In response, Harrison Ford mouthed something silently to Letterman. Then, Ford turned and smiled at the audience.

Letterman stammered, “What did he say? I’m sorry I didn’t…”

Ford interrupted, “I’ve been waiting for just the right moment to say that.”

Letterman responded, “Yeah, we didn’t hear anything you said. You probably get tired of people asking you those questions. Huh?”

Then, Letterman tried another angle, asking, “But you would do it if somebody said let’s get together and do one?”

“Yeah, because I’ve only made $7 billion,” responded Ford. “Wouldn’t you?”

So there you have it, Ford has finally gone on record that he would do another Star Wars and Indiana Jones movie of somebody asked. Now, all Disney has to do is ask.