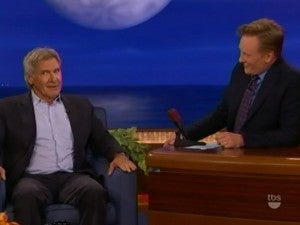 On Thursday night, Harrison Ford appeared on CONAN to promote his upcoming movie Paranoia. Of course, Conan O'Brien took the opportunity to try to wrangle some Star Wars Episode VII secrets out of Harrison Ford. When O'Brien initially asked Ford about Star Wars, he refused to talk about it. However, O'Brien was prepared, and he offered Ford a thousand dollar bribe to tell everyone something about the new Star Wars film. After some encouragement from the audience, Harrison Ford took the money. Harrison said, "A long time ago, in a place far, far away, I forget the rest." Check out the video below for the rest of Harrison Ford's answer.