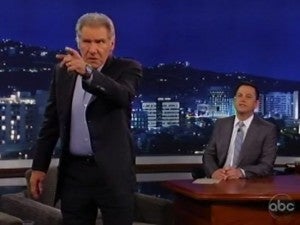 Bruce Willis won't be coming back for the third installment of Sylvester Stallone's testosterone-and-Ben Gay-fueled action franchise The Expendables...but they've found a suitable replacement for him.

Star Wars and Indiana Jones star Harrison Ford will appear in the film, according to Stallone's Twitter account.

"WILLIS OUT... HARRISON FORD IN !!!! GREAT NEWS !!!!! Been waiting years for this!!!!" Tweeted the action star, who it was recently revealed is working on a seventh film featuring his iconic character Rocky Balboa.

"Great news," we reckon, probably doesn't mean that Willis is gone, just the rest of it...although his next tweet--"GREEDY AND LAZY ...... A SURE FORMULA FOR CAREER FAILURE"--offered without explanation on an account that almost never tweets and, when he does, usually tweets about The Expendables, is sure to get some people talking...!

The Expendables 3 will start filming soon. Dolph Lundgren and Steven Seagal are among those joining the cast for the third installment.

Harrison Ford to Appear in The Expendables 3