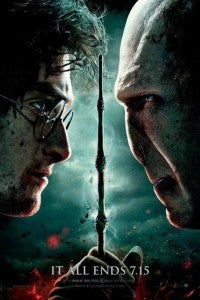 Who would have thunk it? In a summer movie season filled with disappointment, the boy wizard has delivered the biggest opening weekend not only of the year but of all time. Everyone sort of expected that the final chapter of Harry Potter would do very well, but the box office dollars beat even the highest of expectations.

The title had previously belonged to The Dark Knight, but it was not only Batman that Harry Potter beat. Other top opening weekend movies that Harry Potter moved past included Spider-Man 3, The Twilight Saga: New Moon, Pirates of the Caribbean: Dead Man’s Chest, and Iron Man 2. Yes, a wizard has bested superheroes, vampires, and pirates.

According to Box Office Mojo, Harry Potter & The Deathly Hallows Part 2 took in the staggering opening weekend sum of $168.6 million at the U.S. box office. This total was $10 million over The Dark Knight, which had previously held the record at $158.4 million. Next summer, things will get interesting as both Batman and Spider-Man will have another shot at Harry Potter. The Dark Knight Rises and the rebooted Amazing Spider-Man are both scheduled to be released then.