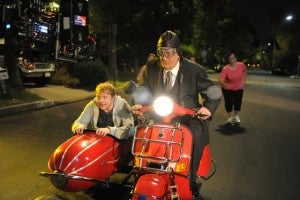 A pilot episode for a CBS comedy series starring British stars Rupert Grint and Stephen Fry has made its way online (in an official capacity at the CBS website) after the creator lobbied CBS to do so even though the network didn't pick up the pilot to series. Titled Super Clyde, the series revolves around Harry Potter's Grint, who is a comic book fan who decides to become a Batman-like superhero with high tech toys when he inherits a boatload of money. Clyde, a mild mannered fast food worker, is bequeathed $100,000 per month for the rest of his life and with the help of his butler, Randolph (Stephen Fry), Clyde begins his thrilling new life as a Super Hero, secretly helping strangers in need. My Name is Earl and Greg the Bunny creator Greg Garcia, who is also responsible for this year's The Millers, filmed the Super Clyde pilot at the same time, and is glad CBS decided to make it available to fans. "The worst part about it not ending up on the fall schedule was that no one was going to see something that I was really proud of," Garcia said in a statement released to Vulture.  "Thankfully the folks at CBS are giving people a chance to see the pilot online, and I'm very grateful for that.  Now I just hope people like it as much as I do." Vulture notes that there's little chance simply making it online will actually impact very much. Not long ago, Mockingbird Lane--Bryan Fuller's Munsters reboot--was aired after the network opted not to pick it up to series and despite strong ratings and a brief, aggressive fan campaign, it didn't get the show a single extra minute on the air.