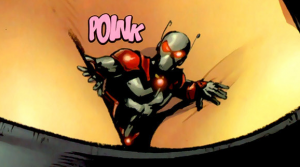 According to Twitch Film's movie news Twitter feed, rumors at this weekends' prestigious Cannes Film Festival have it that Edgar Wright's Ant-Man adaptation, long in-development and often-delayed, has been greenlit by Marvel Studios and may be coming to theaters in 2014.

No details were made available through the tweet, which it concedes is based on rumors only, but Edgar Wright's Simon Pegg-Nick Frost comedy At World's End is just now getting off the ground.

The director had suggested on his own Twitter feed that he hoped to film some Ant-Man before the end of the year, leading to fan speculation as to when the film might go into production and whether it had already been greenlit by Marvel.

Has Ant-Man Already Been Greenlit?