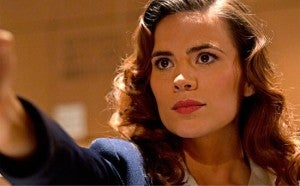 In a new interview with Digital Spy, Captain America: The First Avenger leading lady Hayley Atwell confirmed that she would love to continue playing Agent Peggy Carter--even if it were to be in the rumored Agent Carter TV series and not in the movies.

"The one-shot was so successful, the fan base were like, 'We want more of Peggy!'" Atwell said when asked about the prospect of a series. "I think Marvel probably take that very seriously, and it's certainly something I would be a part of doing. I'd be interested to show different sides of Peggy. I think she could be a great role model and a great member of the Marvel Universe. I love the Marvel lot, they're really great people to work with, so it would be nice to go back and work with them again. I'd definitely do it."

The one-shot she mentioned was included in the recent Iron Man 3 Blu-ray, but screenings at San Diego Comic Con International back in July received rave reviews so it's much more than a week's worth of responses to which she's referring. Her character, arguably the best-liked romantic interest of the Marvel Cinematic Universe Phase One films (there's Pepper Potts, who is widely liked, but Thor's girlfriend Jane Foster is widely disliked and the Hulk movies are a non-factor), will return in Captain America: The Winter Soldier.

The Agent Carter series is one of a number of comic book TV series rumors that have cropped up following the success of Arrow and Agents of S.H.I.E.L.D. Series based on The Flash, Batman supporting character Commissioner Gordon and John Constantine have also been revealed recently.