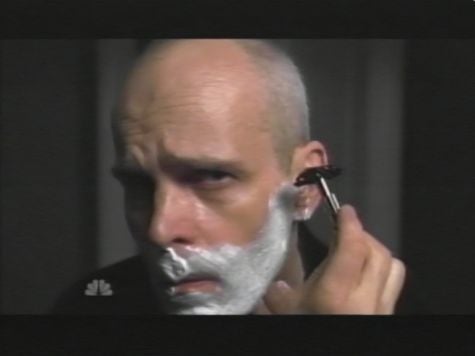 Two Heroes die. Another gets part of his powers back. Old characters return. And we find out the identity of REBEL. A lot happened on Heroes Cold Snap. Let's get to it. The episode opens with Danko shaving. Security system in his apartment goes off. Danko grabs his gun and walks into another room and sees Eric Doyle pinned up against a window. Big bow around him and a note that says "My gift to you." Doyle opens his eyes, sighs, then drops his head. The gift, of course, is from Sylar (who we saw in Danko's apartment at the end of the last episode). The question is why did Sylar give up Doyle? And why didn't Sylar take Doyle's power? Out of all of the abilities we've seen on this show, Eric Doyle's puppeteer ones seem to be as good and effective as they come. Seems odd that Sylar would pass up the opporunity to make himself MUCH stronger. We cut to HRG and Angela meeting in secret. She says that Danko throwing Nathan out the window means their plan is all up to HRG--Nathan has been outed. The problem: HRG knows that Danko doesn't trust him. Angela says to give Danko REBEL, and Danko will be HRG's best friend. She's leaving the city before something unfortunate happens, and gives HRG a tip--don't miss a particular train headed out of town. HRG tells her not to go home, as it wouldn't be good for her health. As to the 'plan' that Angela and HRG have, well, that remains a secret for now. At Building 26, Danko shows Suresh a room full of drugged up Heroes lying on tables. It's the way the Feds keep everyone under control. Suresh sees Daphne and wants to help her. Danko doesn't want Suresh to help. He's tricked Suresh, and some of the agents put Suresh down. Chalk this up as another instance of Suresh being a complete moron. He's incredibly gullible. Someone kill this guy off already, please. Danko shows HRG Doyle drugged up. Danko takes credit for bagging Doyle and says it's his gift to HRG. HRG wants to give back--wow, everyone is in a giving mood this episode. HRG says that REBEL is going to try to rescue Tracy Strauss. They should capture REBEL. If they don't capture REBEL, HRG says he'll kill Tracy Strauss himself. The lights go out--REBEL has arrived to save Tracy Strauss. Since the power has gone out, the heat lights are out in Tracy's cell, so she freezes through her chains. What--no backup generator? She finds the room with the drugged up Heroes and wakes up Suresh and Parkman. Parkman grabs Daphne. They get through a door and find a group of armed agents. Parkman gets into their minds and tells them to move along. They do. Upstairs, Danko tells HRG to let Tracy go and to kill her and REBEL. On a side note, if we were ever wondering how the Heroes would gang up, we have our answers. The good guys know where their friends are being held, so I'm guessing we'll see a breakout attempt in a future episode. Tracy is putting on clothes in a dressing room. She freezes off the security tags. She opens the door to the room and HRG is there. He tells her that she should have stuck with Parkman. HRG wants to know who REBEL is, but Tracy doesn't know. HRG wants her to lead him to REBEL, and he'll let her go. Then she'll have a chance. And if she runs or kills HRG, she'll be dead. Tracy knows she doesn't have a choice. On the street, Tracy walks past an ATM, and her name is called. She walks over to it, and money spits out, along with a receipt telling her to go to the train station. She gets in a cab, and guess who shows up in the screen? Micah (+1 to those folks on the message boards correctly picking the identity of REBEL. Micah was a popular choice.) 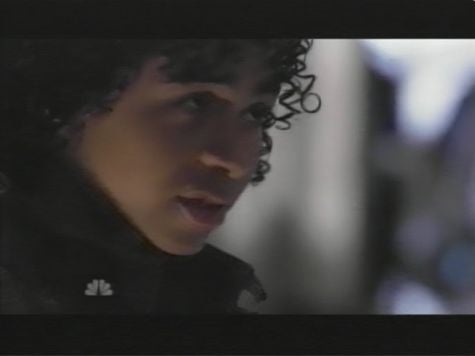 At the train station, Traci walks to a locker and picks up a passport. Micha appears and tells her that he's REBEL. She tells him that she's led the agents to him, and that she didn't know Micah was REBEL. Micah makes a gas leak happen at the station, and they make their escape. Tracy and Micah are in a parking lot. Micah is disappointed that Tracy isn't much like his mom. Suddenly agents appear from behind them. Tracy asks Micah to make the sprinkler system go off. He does, and Tracy tells Micah to get out of there. Tracy gives herself up to the agents, but before she's caught, she freezes all of them. Micah gets out right before the ice gets to him. Apparently Tracy knew this was a suicide mission, as she freezes herself. Danko walks up (how did he not freeze) and shoots Tracy's frozen body. She shatters into a thousand pieces. HRG comes in and says he hasn't seen REBEL. That, I believe, does it for the trifecta of characters played by Ali Larter. Niki Sanders. Dead. Jessica Sanders. Dead. Tracy Strauss. Dead. Is this the end of Larter's run on Heroes? 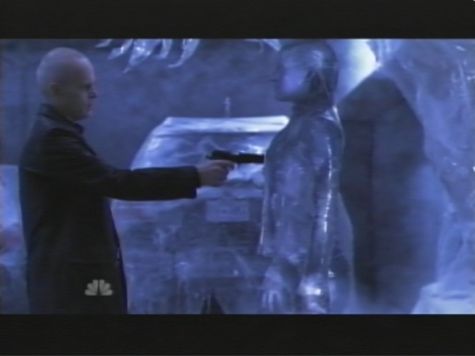 At the hospital, Parkman is bringing in Daphne. He makes up a story, and the doctor tells Parkman that he has to report a gunshot to the police. Parkman changes the doctor's mind for him. Daphne wakes up in a hospital room with Parkman. She's been out for two days. Parkman convinced the hospital staff that she was Gwen Stefani, and because of that, Daphne has received the best care possible. I'm not sure how they could make her gunshot wound COMPLETELY disappear, but hey--it's television. The two argue about Parkman's ex-wife. It seems that Parkman used Janice's name when handing the made-up story to the doctor, and Daphne isn't too happy about it. She tells Parkman she needs him to be committed to HER, and she doesn't believe he is. She runs away. 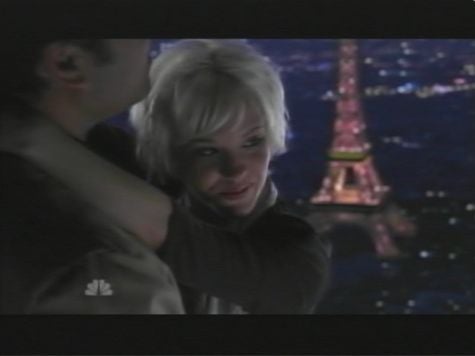 Later, Daphne is sitting somewhere contemplating. Parkman shows up. They're in Paris. Parkman says he flew, and then he floats up in the air to show Daphne. How in the heck did Parkman get flying abilities? He takes her around Paris and Daphne realizes that everything she's feeling is a dream, which explains the gun shot wound disappearing and Parkman's flying. She tells Parkman to let her go. That Parkman deserves the real thing--not a fantasy. And that he's made her happy. She wants him to take her to the moon, and he does. Then she dies. And just like that--BOOM! Another fringe character is deleted from the show. The question is, how will Parkman react to Daphne dying again on him? He thought she was dead in the desert, only to find her alive. Now she really dies. Will he go back to Pyscho Matt? Or now that he's been able to give her a complete and fitting goodbye, will he just move on? Oh wait--ex-wife Janice suddenly reappears in the same episode his current girlfriend dies. Betcha can't see the future for Parkman, huh? Hiro and Ando are playing with baby Matt Parkman. Ando figures out that the baby is actually Matt Parkman's son, not the Matt Parkman they know. The baby has a power--he is able to turn on and off an unplugged television. Someone shows up, and they hide in the closet. It's Parkman's ex-wife Janice. 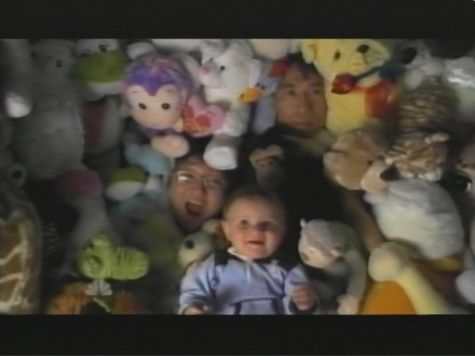 Hiro tells Janice that the baby is in danger. They ask if she knows that little Matt has a power, and she says she knows. Hiro and Ando tell Janice that the government is coming to get her son. And, right on cue, a knock on the door. A group of agents have a warrant for Janice and little Matt, and they want mother and child to come down to Building 26. Janice lies and tells them that the baby is at the sitter's house. She offers to take the agents there, and everyone leaves. For a moment, we think Hiro, Ando, and little Matt are safe. But then an agent radios for others to search the house. Hiro and Ando are trapped. An agent crashes through the door, and Ando zaps him with a bolt of lightning from his hand. Another agent comes in and shoots at Hiro, but time stops. Hiro believes little Matt gave him back his powers simply through contact. He attempts to teleport everyone, but is unable to do so. Maybe little Matt didn't have anything to do with Hiro regaining part of his powers. A crafty Hiro puts a frozen Ando into a wheelbarrow (while baby Parkman is strapped to Hiro's chest) and gets everyone out of the house. Outside, Hiro wheels Ando along. People outside are frozen in time as well. Hiro steals a bottle of formula from a woman and gives it to the baby. Then Hiro stand up and unstops time. Ando wakes up and Hiro fills him in on what he's missed. Angela is in a car on her way out of town. She has a vision that she's about to get taken by some folks. She tells her driver to not stop, but just then, he's shot. Angela, knowing what was going to happen, slips away. HRG tells Danko that Angela has escaped, but they'll track her down. I gotta say, if Angela's future seeing is only a few seconds ahead of real time, that isn't much of a power. The agents eventually catch up with Anglea, but she slides into an elevator just before the agents get to her. However, the agents break into the elevator system and send the elevator back down to the main level. When the door opens, agents await, guns drawn. But Angela isn't alone--Peter is there. Peter grabs his mom and flies her up through the elevator shaft. How in the world did Peter know where his mom was? 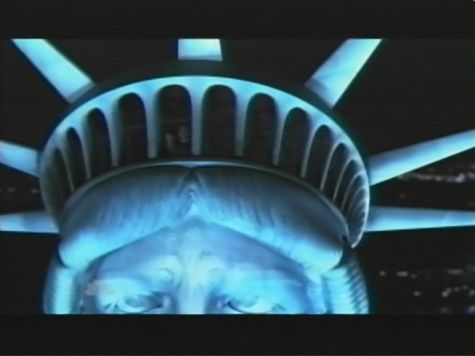 Peter and Angela are at the top of the Statue of Liberty, and he says "So what do you want to do now?" The episode ends. Something tells me Angela knows EXACTLY what they're going to do.

She-Hulk: Attorney At Law Gets a Special Edition Doll From Disney

Olivia Newton-John To Be Honored With State Funeral in Australia

AEW All Out Status Updates on CM Punk and Kenny Omega

Ghost of Tsushima Director Discusses Plans for the Movie