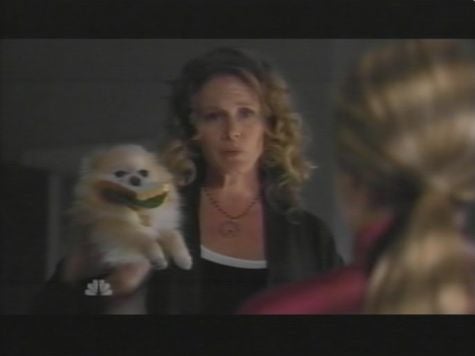 I have to hand it to the writers at Heroes. Just a couple weeks after I criticize them for boring the heck out of me in the Building 26 episode, they're setting everyone up for a wild ride toward an apparently extremely interesting climax. Either that, or we're going to see a couple of fun storylines conclude prior to the season finale. Either way, I think we're in for some exciting television. Exposed had a number of plotlines, so let's get to them. Peter and Parkman have been targeted by Danko/The Hunter and his agents. It's shoot to kill on the pair. To me, this should be an easy assignment, as Peter and Parkman have proven to be bumbling idiots. You would think they'd cull their emotions once in a while and come up with an actual PLAN. Back at Isaac Mendez's former loft, Parkman has been painting the same image over and over. Peter pulls Parkman out of the trance and tells them they need to get moving. And boom--a message from REBEL appears on a computer screen. I'll say this, REBEL has some sweet timing. 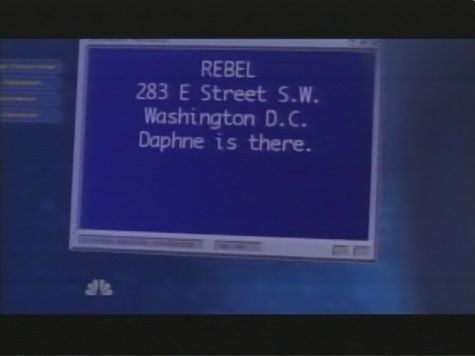 The message says that Daphne is at Building 26, and that the agents are headed toward the loft at that moment. The two escape just in time, and we're left, again, to wonder who exactly is REBEL? Is it Angela Petrelli? HRG? I'm guessing it's a past character that we haven't seen in a while. Just not sure yet. Outside Building 26, Peter touches Parkman on the arm and borrows Parkman's powers. Parkman has a coat on, just like last week. Only last week, Peter was able to fly off with Parkman without assuming Parkman's powers. Is this a writing glitch? Or does Peter have the ability to control which powers he borrows? No matter the answer, it seems like a pretty poor tradeoff for the folks at Heroes. It shouldn't be a big deal to learn about how Peter's powers work. By not telling us, they're only opening themselves up to speculation that the writers can't keep a story straight. Tell the deal with the borrowing power, then get on with it. Stop the secrecy. Peter and Parkman quickly dismantle a variety of employees at Building 26 with their mind powers. Danko, HRG, and Nathan know the two Heroes are in the building, but they can't get close. Peter hacks into a computer and finds that Daphne has been transferred to a hospital. He then finds video of the Heroes being led into the airplane (the one that crashed a few episodes ago). He downloads that to a flash drive, just as--SURPRISE--REBEL pops up on the screen with a message. They have 30 seconds to get out of there. In the hall, the pair meet up with Nathan, Danko, and HRG. Parkman tells Peter to leave--that he can handle it. As Peter leaves, loud sirens and bright lights come on. It appears that audio distractions are the way to get Parkman off his game. He is taken down. We've seen it before, and this is another example. Parkman is just WEAK. He can't keep his emotions in check, and he's unable to master his powers (though he does appear to be a much better painter than when he first started). Can't we have ONE leader of the good guys that is up to the task? I realize that the opposing side of HRG, Danko, and Nathan aren't bringing the potato salad to the next MENSA picnic, but they at least have some brains. And they have plenty of resources. Can't we have SOMEONE that can compete with them? Outside somewhere, we see Angela talking to Nathan. Nathan asks if he's helping Peter and she says "don't be ridiculous." Then she says it isn't her. That she would never betray Nathan. He says that Peter stole files and people want his brother dead. Angela tells him to protect his brother. Peter calls and offers a deal. Parkman and Daphne for the files. Back at Bldg 26, Danko says he doesn't want to make the deal. Nathan tells them to make the deal, but Danko says that he's following orders from the President. The U.S. Gov't. doesn't negotiate with terrorists. The Hunter takes HRG and they leave. Peter is at the exchange site (a parking deck), and HRG tells Peter, through his thoughts, that it's a setup. But it's too late. Danko shoots him. Peter falls over the deck. HRG and The Hunter run over, and we see someone flying very fast. The main question: Why did HRG help Peter? Has HRG sworn protection to Peter? Would he have done that for someone else--like Parkman? And what if Peter didn't have the ability to hear/read thoughts? Would Peter be dead now? Cut to Peter, Angela, and Nathan meeting. It was Nathan that saved Peter. We couldn't see who was flying because he was going so fast. Peter has a flesh wound. Peter tells Nathan things are out of control, and Nathan agrees. Nathan says that he'll fix everything but he needs Peter's help. Angela tells Nathan not to take his brother, but Nathan says she has her word that he'll take care of Peter. Peter stands up and approaches Nathan. He doesn't trust Nathan--we can see that. Then Peter hugs Nathan and borrows his power and flies away. Nathan wants to go after him, but Angela tells him not to. The game has changed, and she says Nathan must be ready. She whispers something into his ear, and Nathan has a bewildered look on his face. He looks to the sky. What did she tell Nathan? What has changed? On television, the tape that Peter stole is playing on television. The reporter tells of Patriot Act violations, and this looks like bad news for the folks at Building 26. On the road, Luke and Sylar are headed toward Sylar's father's house. They're using the computer equipment Sylar stole from the Feds, which shows where every agent is. Right now, they're in the clear. 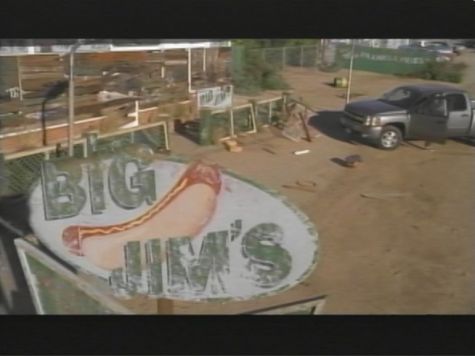 Sylar suddenly pulls over to Big Jim's Franks and Fries. It's boarded up--long been closed. But with a flick of the wrist, Slyar rips the boards off the door and they go in. We find, via flashback, that this is where Sylar's dad sold him to a man and a woman. After completing the deal, his father goes out to his car and gets into and argument with his wife. Young Sylar runs after his dad and sees his father flick his wrist toward his mother. His mom falls out of the car, dead. Apparently Sylar's father has similar abilities as his son. 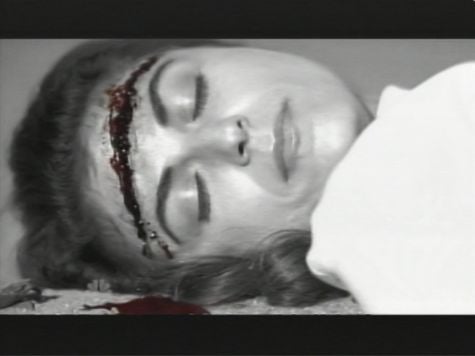 Anyone else think that the Sylar/Father showdown is going to be a doozy? Something tells me that his father will be waiting for him, and that Sylar will have his hands full. Sylar freaks out on Luke because Luke didn't paint a clear picture of his father. Just as we think Sylar is going to kill him, he lets Luke go. Sylar is off to take down his father. Claire is still hiding Aquaman-wannabe (Superfriends Aquaman, not the hook wielding, long haired version) Alex in her house. She tells Alex that he needs to split town, but Alex, of course, doesn't want to leave. He has family, friends, etc. Claire gets snippy toward Alex and tells him that if he wants to survive, he'll do what she says. Anyone notice that Claire is quickly turning into HRG? The "Do as I say/it's in your best interests line" is straight out of the HRG handbook. 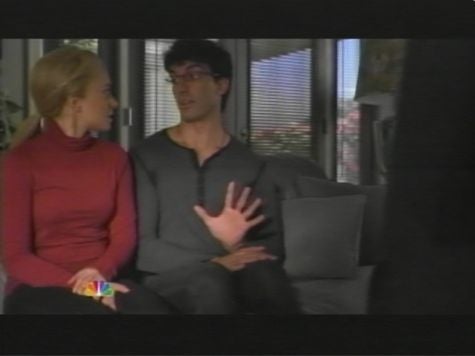 Sandra/mom catches Alex upstairs and she's disappointed in her daughter. Claire and Sandra have a little tiff, and that's when Claire says that she has to 'lie to protect' her mother. Again, I ask, anyone notice that Claire is turning into HRG? Sandra lets Claire know that there are agents sitting in a van outside the house. She agrees to get Alex to safety, but they're going to do it on her terms. Then, shockingly, Sandra splices together a perfect fake ID and becomes an expert on face recognition technology. Really--does anyone believe this? Episode after episode, Sandra is shown to be incredibly clueless. And now, she's Jason Bourne? Please. I'm guessing the writers of Heroes must have read one of my previous reviews blasting Sandra's character. Later that night, Sandra leaves the house in her car, and the agents cut her off. They don't see Claire or Alex, and they realize they've been tricked. (A sidenote--the female agent is incredibly attractive) The agents run after Claire and Alex, who end up hiding in a pool. Claire begins to run out of air, and Alex kisses her, giving her all the air she needs. Ahh, teenage underwater love. It's special. 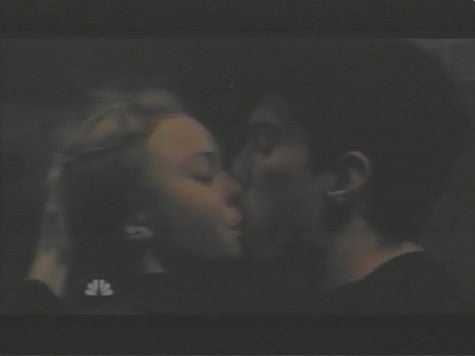 The episode ends on two GREAT scenes that have us jonesing for more. Parkman is tied up in a van with Danko. Parkman tells Danko that what the government is doing is wrong. Danko says that Parkman is the enemy--he's a terrorist. Then he sticks a needle into him and shoots him up. The van stops, and Parkman is thrown out into a very public place. He has a bomb strapped to his chest. 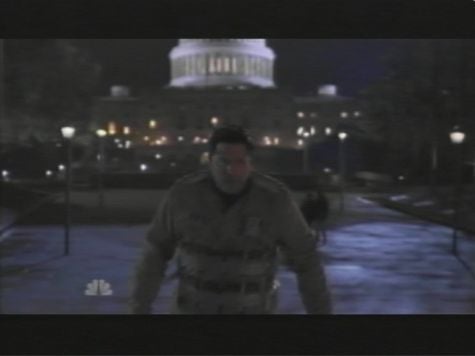 Back at the Bennet house, Claire and Sandra are talking. Sandra made popcorn. It's in the microwave. Claire goes to kitchen, but the popcorn isn't there. She turns, and it's Eric Doyle, the psycho that can force people to do things (the same one that abducted Claire, her biological mom, and her adopted mom). He has a text message from REBEL that says, "Claire will save you." He says, "I need your help Barbie." YES. Now it's getting good.