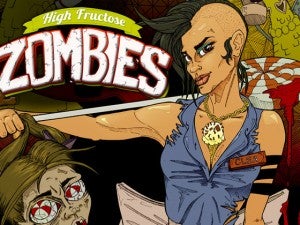 When ComicBook.com went to New York Comic Con earlier this month, we were treated--pun intended--with a fresh and bizarre take on the zombie apocalypse from Sarah Braly and David Phillips, whose book High Fructose Zombies was set up across the aisle from our booth. It was the couple's first comic book convention with High Fructose Zombies, a comic they created on their honeymoon, and their first print copies sold out at the show while their Kickstarter campaign has more than doubled its goal with a week or so to go. The hugely entertaining comics revolves around Clea, who's fighting to save the world from an outbreak of zombies created by exposure to toxic candy bards from an evil confectionary conglomerate that combines the worst elements of the Walt Disney Company and Willy Wonka. Braly and Phillips joined us at the show to talk about the series, for which you can check out a trailer following the interview. Russ Burlingame: For the uninitiated, why don't you give a quick summary of what High Fructose Zombies is? David Phillips: Not a problem! "When a brand-new candy bar starts turning people into zombies in the small town of Sweet Tooth, it is up to Clea Brown and her ragtag group of friends to stop the evil Yumzy Corporation from raining down the Sugarpocalypse!" RB: Is that your convention pitch? DP: That is the official pitch! RB: And you guys have already eclipsed your mark on Kickstarter, right? 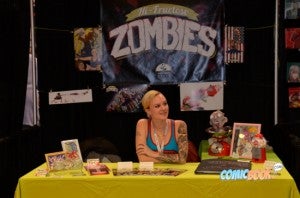 We did. We hit it and went a tiny bit over [at New York Comic Con]. DP: It had only been five days, so we've hit our initial goal and we love it, that's amazing. RB: And I never really thought of it, but it's a great idea to be able to direct people to a Kickstarter from New York Comic Con. There are people all excited about comics, but who don't have cash on hand. SB: Exactly--it helps give people another avenue. DP: You give them a chance to go look at some more stuff and meditate on it. RB: You've got one issue out--do you have a timetable? SB: Yes--we'll be doing the first six over the next year. Our Kickstarter delivery date is February of 2014 for the full graphic novel, so the second issue will be coming out at the end of January, beginning of February. RB: This is one of those books that has kind of a Twin Peaks vibe to it, in terms of everything in town is kind of too precious. SB: Exactly. We're big fans of Twin Peaks. DP: Everything in our comic is precious! We've definitely tried to make it an entire atmosphere, a world-- SB: Exactly. Everything from the menus in the background to dripping, oozing ice cream between panels, which will only be increasing over the next few issues. DP: We try to generate the world with our comic book, which is why when we made the comic book we didn't stop there. We also made the candy bar from the comic book that does turn people into zombies! SB: And there will be more of that stuff going forward. RB: And that's great. You don't usually see such kind of esoteric merch coming out of somebody who's literally just printed their first issue. what made you guys decide to go that extra mile? SB: Two reasons--we're both designers in our regular career, so we like stuff like that. We like creating products that relate--it's very much who we are. And I'm a huge fangirl at cons. So I know what I like to pick up from people. I would buy the candy bar, I would buy the custom artwork, so we wanted to make sure that was available for people [at New York Comic Con], to get them excited. RB: And fans are so hung up in--like the Star Wars expanded universe and the superhero shared universes--in getting something more than what they're buying with their entertainment. It's easier to sell something if you can say, "You also get all this other crap with it." SB: That's the great thing that Kickstarter provides, too--adding those extra layers of rewards so you have this awesome thing at the end of the day. DP: It's totally the deleted scenes and the extras that come with your big DVD/Blu-ray combo pack or whatever. RB: Well, and you can choose from the download, the DVD or the Blu-ray depending on what people say ahead of time they want to spend. SB: Absolutely. The pre-ordering structure is fantastic because [the first print] was out of our savings for this round, but it helps us for the next time around to not be so out-of-pocket, which is helpful for sustainability. DP: It's really nice to actually know you're writing for an audience. RB: And what do you want to tease for the rest of the series beyond the first issue, which people can get now via the Kickstarter? DP: For people who have read the first issue, what I can say, according to my non-existent, non-disclosure agreement, is that what we'll have upcoming is the grand opening of Yumzyland, which is the candy-themed park that may or may not have a massive zombie outbreak involved. SB: And of course Halloween will eventually be around the corner--and lots of candy mayhem will happen then. DP: Zombies and mayhem and awesomeness will occur!