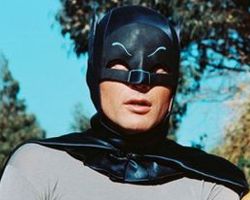 Quick, how many Batman related projects can you think of in five seconds? Do things such as The Dark Knight Strikes Back, Tim Burton and Christopher Nolan’s Batman films and a host of supporting characters come to mind? They are probably just the tip of the iceberg, and in many, perhaps surprising ways, a part of this is due to none other than Adam West.

Not Adam West on his own, but the three season, 120 episode high-camp TV series of the late 1960’s, starring West as the titular Batman. Comics as a whole were about a decade removed from the scare of Dr. Fredric Wertham’s alarmist book about the “dangers” of comic books, Seduction of the Innocent. Batman had slowly devolved over the course of the 1950’s and early 1960’s, mainly due to silly costumes, adventures in sci-fi, outer space and various other machinations, including the odd additions of Batwoman and Bat-Girl as heterosexual supports for the supposedly, according to Wertham, homosexual heroes.

The TV show proved to be a huge hit, with celebrities of all types, such as Dick Clark and Bruce Lee, making appearances when Batman and Robin would scale the wall of a building. The two episode a week format was popular, and the villains found perfect actors and actresses to embody their elements, villains largely forgotten in the comics for years. Even though it was an expensive show and the ratings fell pretty quickly after the first two seasons, the enthusiasm and attention it generated helped to invigorate Batman and Detective Comics. It sounds silly perhaps to think of the show that gave us the Batusi and King Tut as having any connection to the modern versions of the Batman universe we see today, but here are some key reasons why Battle for the Cowl, Christian Bale and the vast media mythology that Batman has, owe the 60’s series a bit of gratitude.

1. The Birth of Barbara Gordon - The vitality of Batgirl/Barbara Gordon/Oracle can all be traced back to her introduction in the third season of the ABC TV series. Brought on to perhaps draw more viewers, especially young males and girls, with a new dynamic, Batgirl burst onto the scene in her high-kicking debut “Enter Batgirl, Exit Penguin.” With an interesting secret identity, daughter of Police Commissioner Gordon, she was fleshed out fully in future issues of Batman and Detective Comics, eventually gaining a highly-regarded status in the DC Universe. She’s still around today, considered one of the most recognizable characters to come out of the Silver Age, and a vital part of Batman’s network and family. Even though the Birds of Prey are currently finished, she still remains a vigilant and intriguing part of Gotham and its heroes.

2. Riddler’s Revival - Seen only briefly during the Golden Age as a minor villain, Frank Gorshin’s portrayal, John Astin notwithstanding, of the Riddler did much to vault the character back into the public consciousness. Gorshin’s performance nabbed him an Emmy nomination, a coup for the campy series. After that, Riddler soon became a highly valued member of Batman’s rogues’ gallery. Making more and more appearances throughout the Silver and Bronze Age, Riddler kept gaining in prestige and reputation due to the emerging complexity of his deathtraps. He has been shown in all animated incarnations of Batman and has now become a new thorn in Batman’s side: a legit PI. Would Riddler have even played such a significant role in the Hush storyline if not for his emergence in the TV series? It’s hard to say, but the show certainly didn’t hurt in any shape or form.

3. Neal Adams’ Artwork - While there is no direct, physical link between the TV series and Adams’ brooding, solitary detective so beautifully portrayed by his pencil, it can certainly be argued that interest in the show helped to draw readers in. The Brave and the Bold would be the first place Adams had to show Julius Schwarztz, long time DC editor, just what he could do with Batman. With detailed, rich visual images of Batman in this team-up book, the artwork and dramatic writing hooked new readers, who had come to the books as a result of the show, and was an interesting departure from the camp aspect of the TV show. After the show ended, and Adams had transitioned to the main Batman books and hooked up with writer Dennis O’Neil, it was comic book magic. Creating amazing stories and characters like Ra’s al Ghul, they brought readers to the series in droves, and their lasting impact on the character is still felt.

4. Catwoman Returns as a Romantic Foil - Even though she had been seen as a burglar/beautiful vixen for a few years, she was largely unseen for a good chunk of Batman’s career. With Julie Newmar’s Catwoman in seasons one and two, the character reemerged in a slinky black catsuit, low slung belt and a lot of interest in Batman. Even the sometimes silliness of the show couldn’t suppress the obvious attraction between the two, and the comics picked up on this and ran with it more than ever before. With Catwoman, in comics and TV, trying to convince Batman to join her on her side, it’s no wonder the relationship, is still so complex. The show reintroduced a dynamic that was begging to be reexamined, and one that perhaps will help set up the next phase of Bruce Wayne’s character development.

It’s a bit of a pity that the show is not available on mainstream DVD, but several networks still carry the show now and then, mostly on cable, but the spirit of the show lives on without interruption. While many may disparage the show for what it was, there’s no denying that a small debt of gratitude is owed for what the show was able to do in terms of paving the way for the additions mentioned above.