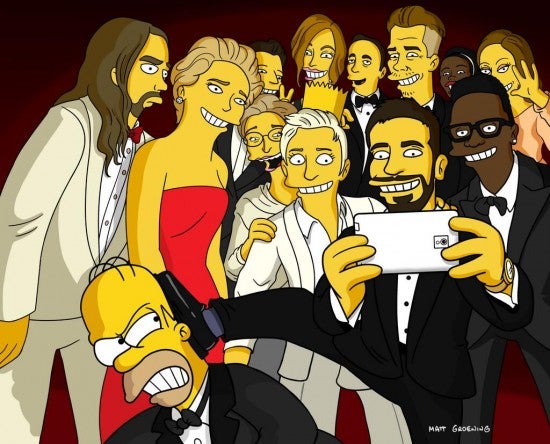 Apparently it took him a few hours to recover from getting crossbowed through the head by Daryl Dixon--but once he did, Homer J. Simpson made his way to the Academy Awards and attempted to crash Ellen DeGeneres's Twitter-busting Oscar "selfie." Along with the image above, FOX's official Homer J. Simpson Twitter account posted the comment, "The ugly true story of that Oscar® selfie can finally be told! Let's break Twitter again. Look for Bart." Social media took a beating earlier this week; hours before The Oscars crashed Twitter, the site experienced a brief, traffic-related outage when The Walking Dead's Norman Reedus and Emily Kinney were taking fan questions ahead of Sunday's screening of the latest episode of the hit AMC series. That same night, a photo from Justin Bieber reportedly had the same effect on Facebook's Instagram service.