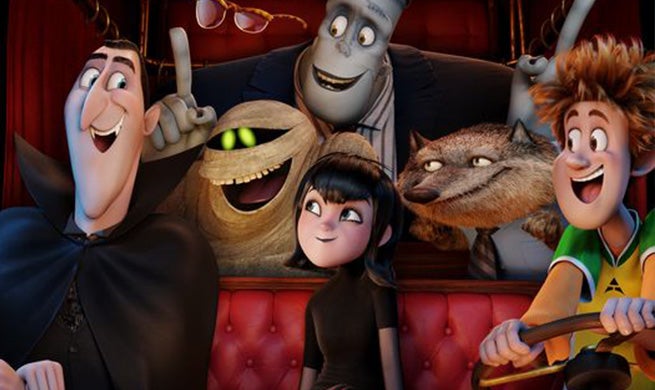 Gennde Tartakovsky, director of Hotel Transylvania 2, took the stage to present the trailer for the film. Although some of the animated footage was clearly not completed, Sony provided a look at the sequel.

Jonathan and Mavis now have a child together, a little red headed boy. Dracula is happy to have another young vampire in the family, although, the child is clearly no vampire and Mavis doesn't intend to force him to act like one.

Dracula sends Mavis and Jonathan on vacation so that he can keep the boy and mold him into a vampire. Dracula rounds up his friends, including Frankenstein, Griffin, Mummy, and others who cram tightly into a car to embark on an expedition to turn the child into a vampire.

Frankenstein tries to show the boy how he scared people, but when he pops out and roars at two young female joggers, rather than getting scared, they recognize Frankenstein and ask for a selfie. He pops his head off and takes the photos.

Dracula tries to teach the boy to fly by dropping him from a tower. The boy is heard screaming and Dracula's pals insist that the boy isn't going to fly. Dracula realizes this, plummets from the tower, turns into a bat, and catches the young boy who enjoyed the fall. The kid laughs and asks to do it again!

Back at the top of the tower, Frankenstein changes his place and shifts the balance, causing the tall tower to fall over. It crashes near a building causing fire and mayhem as Mavis calls her father, Dracula. He answers and tries to hide what's going on by saying he is just at the hotel but she realizes by the sounds around him that he's not at any hotel.

Dracula grabs the group and insists they have to leave. Frankenstein, Dracula, Mummy, and the gang stack atop each other on a scooter and as Dracula goes to take off, they can hardly move because of the weight.