There are a lot of people talking about Stan Lee at 90 today, but veteran writer/artist and Image Comics co-founder Erik Larsen took to Facebook a few minutes ago to share a story about Stan Lee at 65 -- back when the legendary writer/editor got tapped to script the first  story he ever sold to Marvel.

The story, which was done in "Marvel style," was plotted by Larsen and then-Marvel editor Jim Shooter, then drawn by Larsen before being scripted by Lee (and inked by Vince Coletta--what a creative team!). 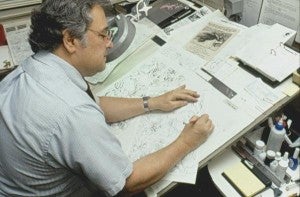 "The year was 1985. I'd already been making comics professionally for a few years and corresponding with Jim Shooter trying to worm my way into Marvel. I finally met Shooter at the Chicago Comic Con. He flipped through my stack of sample pages and said, "So you're a professional now?" "Yes," I said. Shooter asked, "How would you like to draw an issue of Marvel Fanfare?" I suggested plotting it at the show. Shooter agreed. I sat down with Jim Shooter at the hotel bar and we kicked around a rough plot for a Hulk Vs. Thor story. I went home and drew the story we'd plotted, putting copious (and often hilariously out of character) notes all over the margins. I sent in the pages and waited. If nothing else--I had some killer samples that I could show folks to line up more assignments (which I did). Jim Shooter chose his favorite inker and writer to work on my first Marvel assignment: Vinnie Colletta and Stan Lee. My first Marvel job sat on the shelf for a while. It finally saw the light of day in 1987 as Thor #385. I'd made it."

Seen at right, another gem from Larsen's Facebook page: John Romita, Sr. doing art corrections (he "fixed a few faces here and there") on the issue in question.