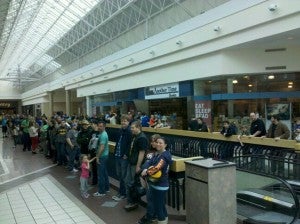 This is the story of two comic book stores.

The pair of stores are located within miles of each other in a mid-sized city in Upstate New York (Syracuse). Each is located in a mall--one the mega-mall at the center of Syracuse and one in the sad, dying mall in the upscale suburb of DeWitt. And each of them, as one would expect, had lines in the morning for Free Comic Book Day.

By 11 a.m., though, the larger store had already lost its crowd; there was a small group of people there, but no more than could have been found in the shop last weekend, and most of those present appeared to be there to play games at the tables in the back, where Magic the Gathering and HeroClix and the like are encouraged. They were out of a few of their Free Comic Book Day titles already and, having no signing appearances and no events planned, it's likely that the sizable stacks they had remaining of DC, Marvel and small press books probably survived much of the day intact. The staff was organized, helpful and courteous but there was no effort put into making the day anything more than a busy morning followed by eight hours of business as usual.

Across town, by noon the smaller store (Cloud City Comics and Toys, who provided the photo above) was completely out of all of its Free Comic Book Day titles--the last to go being DC Comics' The New 52 #1. There was a sale on, the About Heroes podcast was filming in the back of the store, and local talent was lined up at the front to sign and sketch for fans and kids. The store was packed with people, and the register was busy all day long. The owner was bouncing around the store like a manic bumblebee, hugging, shaking hands, kissing babies and helping out the pros present. Batman was there to pose for photos, the staff was updating fans on Facebook all day long and it was, generally, an Event.

Free Comic Book Day is, these days, sort-of forced to be all things to all people. Fans want it to provide them with exclusive books that tie into their long-running continuity sagas, while the direct market and publishers hope to drive new traffic into the stores by utilizing their best talent and most marketable titles and characters. The mainstream media pays attention in a way they rarely do to the goings-on in comics, in no small part because Marvel Studios has made it a tradition to launch a movie right around the date (this week, of course, it's The Avengers). The publishers and Diamond Comics Distributors go all-out to be sure that Free Comic Book Day is an event that people look forward to, and if your store is treating it like just another day, except with a table full of comics that nobody pays for, you're doing it wrong.

The carnival atmosphere of stores like Cloud City dispels the reputation of comic shops as a niche or fetish market that appeals largely to the same handful of overweight, middle-aged men who like to read about guys in tights who drop buildings on one another. It generates buzz and enthusiasm around comics and encourages passersby in the mall that a comic book store is someplace their kids might actually want to go. It's a chance for the comics industry to put our best foot forward and, too often, retailers who are already harried by the chaos of a weekend crowd fail to do so, which is a loss to all involved.

How To Make Free Comic Book Day Work (And Not)