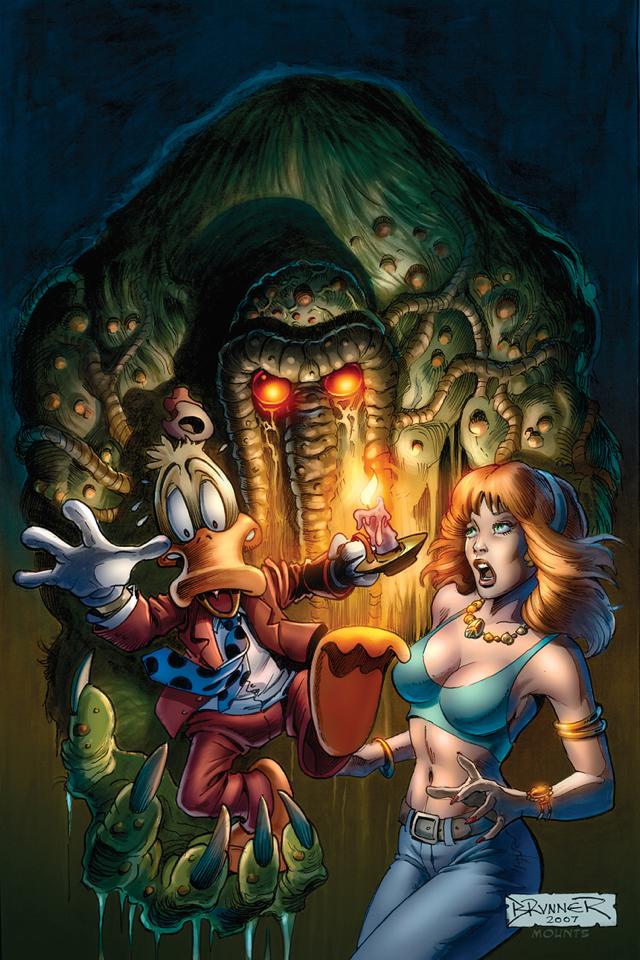 For those asking who that duck is at the end of Guardians Of The Galaxy is will have a chance to catch all his adventures in one oversided tome. The long-out-of-print Howard the Duck Omnibus, currently selling for between $300 and $400 on Amazon, is now available via Diamond Comics Distributors, ComicBook.com has confirmed.

To get a new one still in its shrinkwrap will cost you $100 from Marvel (less if you get a discount from your local comic shop). It will be available for pickup in October.

Here's the official description, via the Amazon listing for the 2008 edition; as far as we can tell, the contents of the book are not different this time around:

Born on a planet populated by talking waterfowl, Howard the Duck found himself trapped in a world he never made: ours! Howard was the archetypal outsider, able to see through the absurdities of human society in the 1970s with uncanny accuracy and an acerbic wit. His adventures presented writer Steve Gerber with a platform from which to engage in an ongoing critique of contemporary fools and pretenders, from power-mad capitalist wizard Pro-Rata to cult leader Reverend Joon Moon Yuc to the dreaded Doctor Bong! Experience for yourself the complete comic adventures of Howard in this Omnibus collection, reprinting his first appearances and the entire run of his first series.

Digital copies of the original comics by Steve Gerber, Frank Brunner, Val Mayerik, Gene Colan and others have also been added to Marvel's digital comics library, quietly inserted on Tuesday. You can shop them now.

In addition to content from the Omnibus, the 2007-2008 Howard the Duck series by Ty Templeton and Juan Bobillo has been added to the digital store, as well.

Copies of Howard the Duck comics have been hard to come by for a while; even the low-cost, black-and-white Essential Howard the Duck sells online for between $40 and $80 from both Barnes & Noble and Amazon.

The character has often been one to create some headaches for Marvel; in 1986, a feature film was made based on the character that turned out to be the second-lowest grossing movie ever based on a Marvel character (the lowest being Punisher War Zone) and one of only two to make less than $20 million at the box office. Back in the days before Marvel was a subsidiary of Disney, they also had to redesign Howard at one point to look less like Donald Duck, following legal threats from the House of Mouse. So if you're still scratching your head asking yourself who that duck is at the end of Guardians Of The Galaxy, you'll be able to find out!