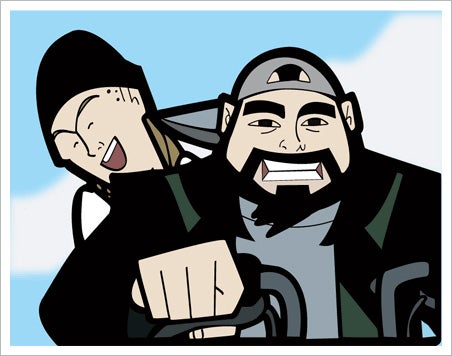 Bob and Harvey Weinstein, the Miramax founders who have been among filmmaker Kevin Smith's most ardent supporters in the now nearly twenty years since they first distributed Clerks, are partnering their new production house The Weinstein Company up with the no-longer-Disney-owned Miramax, reportedly resulting in the exploitation of a number of properties that the Weinsteins worked on at Disney before they left.

Deadline reports that sequels are being developed to Shakespeare in Love and Rounders, while films like David O. Russell's Flirting With Disaster and Ben Affleck and Matt Damon's Oscar-winning Good Will Hunting are set to become TV series. And, yes, Damon is involved on some level, at least with Rounders.

“It’s like unlocking a kingdom full of gold, which Tom describes as diamonds,” said Harvey Weinstein, who tried to acquire Miramax years ago when Disney was shopping it around. The Tom in question is Thomas J. Barrack, whose Filmyard Holdings outbid them at the time. “In an age where there is so much demand for television, we see a lot of TV series. I personally have never made a sequel, but I will make Shakespeare In Love as one. I’ve always wanted to do that and now we have the impetus to. There is so much intellectual property, and we’re in an age where, for however long it lasts, content is king. Working with Qatar and Colony will for us be a great learning experience. Tom is one of the smartest businessmen in the world. We’ll learn by his side and we’re excited to work with Rob Lowe."

"I’ve discussed making Rounders 2 with Matt Damon and I would say that’s going to be instantaneous,” Weinstein continued. “The [writers David Levien and Brian Koppelman] have a great idea, a way to make it more international where you start the card game in Paris, that’s all I want to say. There might be a certain beautiful Parisian actress involved in it, and then we’re off to the racetrack and Vegas with Matty and Edward Norton, and a new supervillain to replace John Malkovich.”

An attempt to do this kind of deal already happened once--in 2010, when sequels to The Amityville Horror, Clerks and Shall We Dance? were also on the boards. In 2012, the CEO stepped down and in 2013, the company again changed hands, so it's entirely possible that the old deal didn't apply anymore under the new ownership and that the relationship with TWC had to be rebuilt from scratch.

What could be interesting to see is what, if any, impact this has on Clerks 3. While Smith and his View Askew Productions retain control of the "View Askewniverse" films, one of Miramax's first television projects back in 1999 was the Clerks animated series, which Smith has said he plans to revisit in 2013. The Weinsteins have long been personal and professional friends to Smith, and one wonders whether this latest installment of Clerks could be the first of his films since Jersey Girl to be released under the Miramax banner?