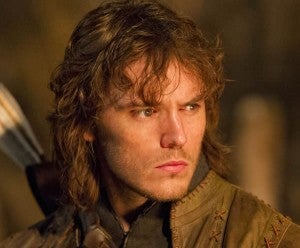 Actually, Sam Claflin will play Finnick Odair in the forthcoming sequel, but he was already Prince Charming in Snow White and the Huntsman, a role that seems to prepare him for Finnick, a character being described as "dashing" and with "rakish good looks" in various casting notices.

Finnick is a former champion who has become a media darling in the time since he one the games, and returns for the Quarter Quell, eventually becoming a great ally for Katniss Everdeen.

Claflin has been rumored for the part since July, and Lionsgate's announcement today ends weeks of speculation.