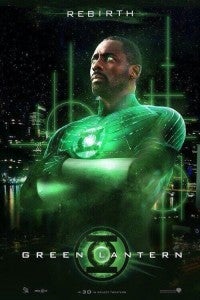 Idris Elba, who has made no secret of his desire to play James Bond and who most recently appeared onscreen as Heimdall in Thor: The Dark World, likes the idea of taking on the role of John Stewart, one of DC Comics's best-known Green Lanterns.

The Pacific Rim star said as much on Twitter today, after a fan prompted him with a fake movie poster for Green Lantern, featuring Elba and the tagline "Rebirth," ironically a reference to the best-selling Green Lantern: Rebirth story that restored Hal Jordan to the series lead after a decade or so of Kyle Rayner and John Stewart being DC's picks for Green Lantern.

You can check the tweet out below, via CBM.

Elba has been a fan-favorite for the role of John Stewart for some time now, and there has always been an idea that, since he's one of the highest-profile DC characters of color, Stewart would be the go-to Green Lantern should the company elect to introduce a new GL in a Justice League film instead of his own solo movie. At one point, hip-hop artist Common was attached to star in the shelved Justice League: Mortal movie from Mad Max director George Miller.

Thank you baby love..i like this idea..."@HeyTaz: @idriselba you should set this up

Idris Elba on Green Lantern Role: "I Like This Idea"