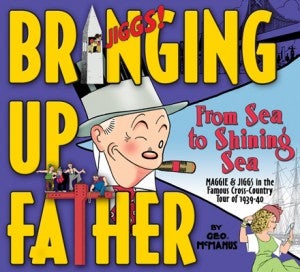 Following recent news that IDW Publishing, home to titles such as Dr. Who and several Transformers books, would publish collections of the satirical comic strip Bloom County comes an announcement that another comic strip is on the way to a collected volume near you! Classic comic strip Bringing Up Father will make its way into stores in November with From Sea to Shining Sea, the title for this collection of the comic strip from 1939-1940. The volume promises wonderfully restored color and crisp reproduction of the style that made creator George McManus' series a classic of any era. The deluxe volume contains every daily and Sunday strip printed during the 1939 to 1940 era and promises nostalgia for fans of the long-running series. Focusing on the misadventures of Nora, Maggie and, of course, Irishman Jiggs, the series ran for several decades after McManus' death in the 1950's.