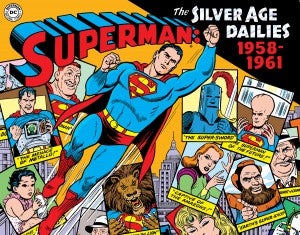 IDW’s Library of American Comics is teaming with DC Entertainment to reprint the rare Superman, Batman and Wonder Woman newspaper strips, according to IDW.

“We’re thrilled to announce a comprehensive publishing program for these historic strips,” said Greg Goldstein, IDW President and COO. “The Library of American Comics is the premier home for archival newspaper strips and this new partnership with DC Entertainment further cements the imprint’s reputation as second to none.”

Many of the strips--which began in the 1940s--have never been reprinted, meaning this material hasn't been seen since it was first published between 1939 and 1966. According to IDW, only about 10% of these strips have ever been reprinted.

The complete comics will be released in three sub-sets, starting with The Silver Age, then The Atomic Age, and finally, The Golden Age. The black-and-white daily and color Sunday strips contained distinct storylines and will be released in separate, concurrent, series of deluxe hardcovers.

The line kicks off this July with Superman: the Silver Age Newspaper Dailies, Vol. 1: 1958-1961, featuring classic artwork by Curt Swan, Wayne Boring, and Stan Kaye. While most of the stories from the Atomic Age and Golden Age were original and completely different from the comic books, under Mort Weisinger’s editorship in the late 1950s Silver Age stories, Superman co-creator Jerry Siegel was brought in to script adaptations of then-current comic book tales.

Fisher-Price's My Home Office Playset Puts the Kids to Work

Marvel's Avengers Beta: How to Get the Fortnite Items