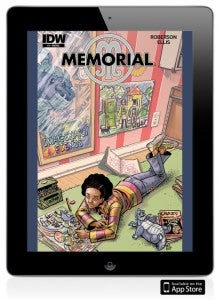 IDW Publishing announced today that a follow-up to Chris Roberson and Rich Ellis's critically-acclaimed miniseries Memorial will begin today. Titled Memorial: Imaginary Friends, the series will launch as a biweekly, digital-only miniseries that will run 99 cents per eight-page chapter. "The first Memorial miniseries that Rich Ellis and I did was always intended to be the beginning of Em's story, not the end," said series co-creator and writer Roberson in a press release. "With Imaginary Fiends, we have the opportunity to pick up where the first miniseries left off, and explore more of the world (or WORLDS) that she and the other characters inhabit. This time around, we visit the Land of Maybe, and see what effect its destruction has had on the real world, in a story that's all about childhood, parenthood, imagination, memory, and loss. Also, talking cats and dragons." Roberson was pretty open about the "series of miniseries" structure of Memorial when he spoke to ComicBook.com's Panel Discussions podcast back in February, in a conversation fans can listen to here. "I've long believed that digital distribution was destined to play a large part in the future of comics, and was delighted when IDW suggested that we structure the next Memorial storyline as a digital original serial," Roberson continued. "Distributing the serial digitally through the IDW Comics app and Comixology gives us the opportunity not only to provide more story to readers who might have enjoyed the first Memorial miniseries, but also to reach new readers who have never encountered these characters before." Obviously, Roberson is a fan of digital--his creator-owned comics company, Monkeybrain, is exclusive to ComiXology and the third issue of Edison Rex, his first series for the publisher, hits the stands today as well. Look for more from Roberson in this space soon!