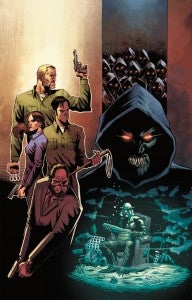 It was just last year that fans were clamoring for IDW Publishing's 2011 graphic novel The Pound, which chronicled the adventures of Scottie and Howie, two guys from Cleveland, and former animal control specialists, who end up biting off more than they can chew as they get tangled up in the supernaturals and the creatures that reside there!  This fall, IDW is bringing the guys back for another chase with the September 2012 release of The Pound: Ghouls Night Out.   According to IDW's press release, writers Stephan Nilson and Charles Pritchett have teamed up with artist Ibrahim Moustafa to bring the series back for a four-issue run this fall.  "It's great to be back with IDW to publish The Pound. We're all excited for this next series. While Horror Business was our origin story,Ghouls Night Out gives us the opportunity to really dive into the Scottie and Howie's world as they adjust their lives to living and dealing with monsters, and I think the readers are really going to enjoy Ibrahim's illustration style," said Nilson. "He's done a great job capturing the action and humor of the story." The new series sees the guys' new business taking off.  Getting laid off by animal control wasn't so bad after all, but this newest arc seems them tangle with more supernatural forces, unwelcome interest from the government, and the pressures of family.  Issue #1 even features the hit Image Comics seriesPROOF's Agent John "Proof" Prufrock in a guest starring role! Be sure to look out for the series when it arrives in comic book stores this fall!  Don't get left behind!

IDW's "The Pound" Returns This Fall For More Supernatural Adventure