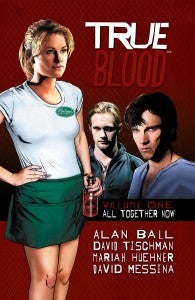 , the mega-hit vampire TV series, will be making the transition from miniseries to ongoing monthly from IDW Publishing this spring, according to a joint press release from the publisher and HBO, which broadcasts the program. For the last couple of years, one of IDW's best-selling titles has been True Blood. Based on the popular HBO series which is, in turn, based on the Sookie Stackhouse novels by Charlaine Harris, the comics follow the adventures of the same batch of Bon Temps-based, supernatural characters introduced in the Harris novels, while each of the three iterations seem to have their own continuity (though obviously similarities between the continuities run deep). With three miniseries already completed or underway, IDW's True Blood comics have been a financial boon for the company and a mainstream success outside of the direct market, with a big presence at Barnes & Noble and other brick-and-mortar retailers as well as online book clubs. With a hardcore fanbase that's been clamoring for a steady stream of new content to get them through the drought brought about by the end of the TV seasons, IDW has decided now is the time to step up and offer an ongoing, monthly True Blood series. "The comics are a great way to continue telling True Blood stories off screen," said Alan Ball, who created the HBO series, in the press release. "With this new ongoing series, Truebies will be able to find a new comic in stores every month. We'll also have even more room to create in-depth drama and further explore the world of Bon Temps." The first miniseries, All Together Now, was widely critically panned but the hardcover collection reached the New York Times bestseller list for graphic novels thanks in no small part to the aforementioned push by Barnes & Noble, who displayed the collection at the central displays at their 700 stores's entryways when it was first released. The second miniseries, Tainted Love, was co-written by Captain America and Bucky co-writer Marc Andreyko, famous for his strong female lead in the fan-favorite Manhunter series, and was substantially more well-received by the comics community. Both are available in collected editions at bookstores or digitally through the Apple iTunes and iBooks shops. The third miniseries, The French Quarter, is ongoing and will be released in collected edition in March 2012, according to the press release. No creative team is named in the press release, although one hopes Andreyko is on the short list. The move follows suit with other licensed properties that IDW have moved from periodical miniseries to full-fledged ongoings lately, including Ghostbusters, Star Trek, Teenage Mutant Ninja Turtles and 30 Days of Night. It's been a big few weeks for IDW; following last week's release of Star Trek/Legion of Super-Heroes #1, the company will launch the Parker: Martini Edition, a prestige-format hardcover collecting Darwyn Cooke's pair of Parker graphic novels (based on the series of novels by Richard Stark) this weekend at the Long Beach Comic-Con.