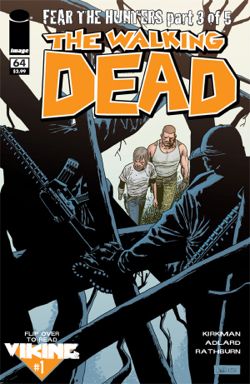 After the success of the recent Walking Dead/Chew flipbook, Image Comics is at it again. Image has announced that next week's Walking Dead #64 will feature the entire first issue of the pre-release sell out Viking #1 in a special black & white edition at absolutely no additional cost. Viking is written by Ivan Brandon with art by Nic Klein. Viking is billed as a crime comic for the 9th century. The series tells the story of two brothers, who are attempting to make their way up the ladder of the Norse criminal underground. However, the brothers quickly discover that they are in over their heads. "The response to Viking has been absolutely flooring in every way. But the chance to expose the book to the entire massive Walking Dead fan base is a whole new level of exciting," said Ivan Brandon. "Even though Viking is normally in our full color oversized format, we were surprised by how incredible Nic's art looked in black and white. I think people are really going to love what they see." Kirkman added, "I'm personally psyched to have Viking in the back of Walking Dead. As both an Image Partner and a fan, I'm thrilled by the book's success and hope to continue its growth in any way I can."