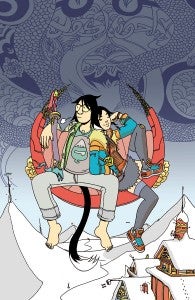 Brandon Graham, the King City cartoonist behind the critically-acclaimed and best-selling revamp of Rob Liefeld's Prophet, announced today that he'll be launching a new miniseries, Multiple Warheads, that will run through Image Comics starting in October.

"I'm really interested in exploring a big fantasy Russia and letting myself wander off of the main path in a similar way to what I did in King City," said Graham, "But I want show the bizarre lives of a woman who smuggles magic organs and her werewolf mechanic boyfriend in a kind of matter-of-fact way."

The series is described in the press release from Image Comics as promising "puns, peril [and] pleasures," and will be the first book that Graham has written and drawn by himself since rocketing into the comics mainstream with Prophet.

"Just as rife with wordplay and wild with futuristic details (Vat-grown radiation-sniffing squids! Self-heating root vegetables! Musical caffeine cigarettes! Organic, mobile palaces!) as the reader-beloved KING CITY, MULTIPLE WARHEADS is a project where Graham has let his mind wander the open road. At the same time, he keeps the lives of his characters, grounded with familiar sentiments and actions."

That's the pitch. Now you've got your mission: Go buy this book. Graham is not a talent to be taken lightly.