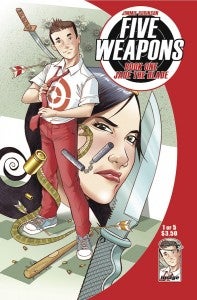 , a new miniseries from Bomb Queen's Jimmie Robinson that revolves around a school for young assassins, will come to Image Comics in February, according to an announcement from the publisher that followed up on several days of teasers for the book.

"I wanted fun with an edge, but I also wanted Five Weapons to be smart and challenge the reader," said Robinson. "While there are plenty of weapons to be found in the pages, there is also an invisible sixth weapon between the panels: the skill of the human mind."

The book in question is tonally in keeping with Bomb Queen but, unlike that title, is suitable for a slightly broader audience, drawing a "teen" rating rather than a mature readers warning.

The first issue will be in stores on February 27. You can check out the official description from the publisher below.

When the world's deadliest, stealthiest, and most infamous assassins need a place to educate their children, an institution that respects and upholds their values, they turn to the prestigious School of Five Weapons. At the setting of the new Image Comics/Shadowline mini-series by Jimmie Robinson (BOMB QUEEN), FIVE WEAPONS, students train in the martial arts, pledging their loyalty to one "club": Knives, Staves, Archery, Exotics, and Guns.

The School of Five Weapons is turned upside down when a new student arrives, one carrying a name that all the students and teachers know: Shainline. The clubs vie for Tyler's loyalty, but it becomes apparent very quickly that this kid isn't someone who is easy to pin down. Tyler has just the edge he needs to succeed at Five Weapons — a razor-sharp mind!