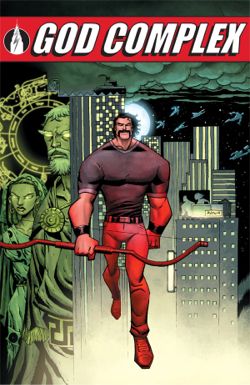 Image Comics has announced a new ongoing series from Michael Avon Oeming, Dan Berman, and newcomer John Brogila. The new series is called God Complex, and it will focus on the secret lives of gods. "In God Complex, the Greek Pantheon has survived the centuries, transforming themselves from powerful Gods of the sky to influential men and women of the Earth," said Oeming. "Some of them live normal lives, some run big business and even more are superheroes. It's an extremely complex world and after hundreds of years of life on Earth, not all the gods are happy about it." God Complex's Apollo has hung up his superhero cape, and he is living in hiding from his fellow gods. He has adopted the disguise of a mortal named Paul. However, the Pantheon are willing to do whatever it takes to get him back in their ranks, even if it against his will. God Complex #1 is a 32-page full color comic book which will retail for $2.99. It is scheduled to arrive in comic book stores on December 2, 2009.