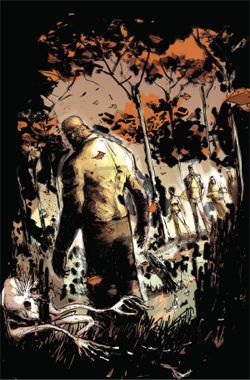 Image Comics has announced that this January the first season of Proof will come to and end, but fans shouldn't worry, because an all-new season will be coming in 2010. Proof is the ongoing cryptozoological comic book by writer Alex Grecian and artist Riley Rossmo. Proof tells the story of Special Agent John 'Proof' Prufrock, who is also known as Bigfoot. John 'Proof' Prufrock works for The Lodge, which is an organization dedicated to preserving and protecting 'monsters' from the threat of human beings. There are currently three volumes of collections in print of Proof and a fourth volume is set to be available during the hiatus. Both Alex Grecian and Riley Rossmo will continue as the regular creative team when the new season begins in 2010. "While this season of Proof is ending, the series is just beginning," said Alex Grecian. "Not only do Riley and I have a couple of side projects such as his Cowboy Ninja Viking, but Proof takes a very big turn with issue #28. It's a natural place to take a short break. Rest assured we'll be back and when we start again nothing in Proof will ever be the same." Riley Rossmo said, "Another reason is to give new readers a very easy jumping-on point. While we've certainly had a great response to the trades, we're making it even easier and more inexpensive than ever to jump on board. If you've never read Proof before or only do so with the collections, the upcoming new season is your chance to become a regular reader." Proof #28 is scheduled to arrive in comic book stores on January 27th, 2010.