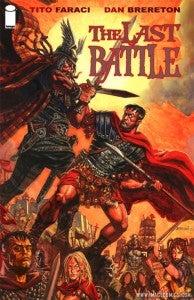 Image Comics has announced that they will be bringing The Last Battle to American readers. The Last Battle tells the story of Caesar's war against the barbarian armies of Gaul. It was written by Tito Faraci with art by Dan Brereton. The Last Battle has previously been published in Italy, Germany, Spain, Brazil and more, but Image Comics is the first to make it available in English. "The 'peplum' or 'sword and sandals' genre was very popular in Italy, mostly in the seventies," said Tito Faraci. "As a child my imagination was formed by the gladiators, centurions, slaves, rebels and charming maidservants of those films. As a student, I studied, learning how the ancient world truly was... and found it fascinating. In The Last Battle, I tried to transmit the 'peplum' emotions of my youth with a correct, trustworthy historical approach." "This project required me to be as well-versed in Roman and Celtic history as I could be to create the visual authenticity required for Tito's script," said Dan Brereton. "An added layer of truth in Tito's script spurred my research and made the story that much more exciting to illustrate for me, and I believe readers will become as immersed in this ancient world as I was painting it." The Last Battle is set in 52 BCE Gaul. The story begins with Caesar's forces laying siege to the barbarian stronghold of Alesia. Meanwhile, the rebel Cammius leads a second barbarian army in a rear attack on the Legions of Rome. Caesar sends General Caius Rodius on a quest to bring back Cammius' head. An interesting angle to the story is that Caius Rodius actually trained and helped raise Cammius.