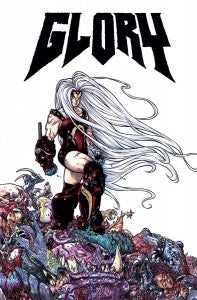 Here's one from the archives: 'Glory,' the comic book series about a half Amazonian, half Demon woman who lives in the Extreme Universe, is being revived.  Originally created by Rob Liefeld, the new series will be written by Joe Keatinge and illustrated by Ross Campbell.  The initial issue will be 'Glory' #23.

"GLORY is a bold new vision of Extreme's premiere heroine! Joe Keatinge and Ross Campbell have held back nothing in crafting a massive epic that is equal parts fantasy, sci-fi and superhero saga." said Liefeld. "The artwork is a mashup as well, it looks like beautiful manga combined with euro-style artists such as Moebius and the detail of Geof Darrow. I told Ross that I refer to his art as 'Euro-manga.' It's bloody and violent, which reflects the tone of the story Keatinge is telling. It's brilliant; I love it."

Knowing that many readers won't be familiar with the content, Keatinge and Campbell are trying to appease both familiar and new readers. "Our take on GLORY is definitely looking toward the future," explained Keatinge. "While I don't want to negate continuity, I think it's an equally bad idea to get bogged down by it. All in all, if you have never even heard of GLORY before, we created this series with you in mind. The first issue gives you everything you need to know about her. The second and third issues expand on it and set up our entire run."

And while the new team appreciates the past, they're certainly putting their own spin on the series. "Obviously, my art style is very different from Rob's original style," added Campbell. "But that was the plan all along with this relaunch, to revive her in a new style. Rob has been so generous with letting us take on his characters, that we're putting a lot of ourselves into this work. Joe and I have already become really invested in the future of GLORY."

GLORY #23 is 32 pages and will hit shelves and digital on February 15.