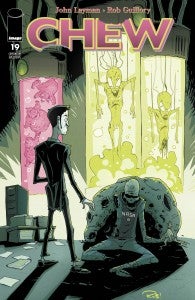 I've said it before--the best thing about San Diego Comic Con is the extremely cool, exclusive stuff you can snag. Image Comics does a great job in this area, and this year is no different.

On top of debut comics, Image is bringing a ton of variant and exclusive covers to SDCC. From a Chew #19 Glow-In-The-Dark variant to a 'Witchblade #146 Kalman Andrasofszky variant, there should be plenty of cool covers to checkout.

In addition, Image will have a bunch of cool merchandise for sale, including 'The Walking Dead' board game, hoodie, and messenger bags. Other items include 'Invincible' and 'Skullkickers' t-shirts.