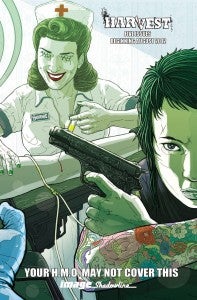 "Your HMO might not cover this," warns another ghastly teaser image for Image/Shadowline's new organ-thief series Harvest. The five-issue miniseries begins in August and tells the story of a doctor who has been working for an organ harvesting ring, and whose only way out of the desperate straits he finds himself in seems to be reclaiming the illegally-implanted organs from the Very Dangerous People he put them into. At left, you can see a look at today's teaser, and below find a compiled image that assmbles the four teasers released so far this week; one more teaser is coming tomorrow. Image describes the series as follows: "Human traffickers.  Rogue medical teams.  Yakuza run organ mills and a six year-old drug fiend.  Welcome to Dr. Benjamin Dane's nightmare.  His only way out?  Bring down the man who set him up by reclaiming organs already placed in some very powerful people.  If Dexter, ER and 100 Bullets had a three-way and that mind blowing tryst somehow resulted in a kid, that kid would read HARVEST. Medical Grade Revenge."