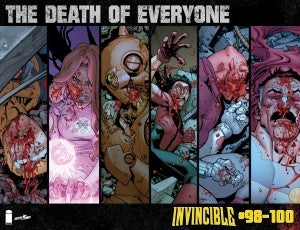 Well, what would be more shocking than the major death that happened in the hundredth issue of Robert Kirkman and Charlie Adlard's Image/Skybound series The Walking Dead? What if Kirkman was to kill off nearly every major character in his other best-selling Image series, Invincible, with its hundredth issue coming soon?

It seems extremely unlikely, but that's just what a new promo--which combines all of last week's "Death of..." promo posters with a new one released yesterday featuring Omni-Man--seems to promise.

Featuring Invincible, Atom Eve, Robot, Kid Omni-Man, Allen the Alien and Omni-Man, the new poster is captioned "The Death of Everyone" and teases the events of Invincible #98-100, which should start arriving in comic shops in November.

A massive, seismic shift in the series' cast could surely put this series on the map in a big way, and emulate the shocking, "anything can happen" spirit that Kirkman likes to cultivate in The Walking Dead. It still seems pretty unlikely, though, as Invincible has traditionally not been as dire and hopeless a world as the one in which The Walking Dead takes place. Indeed, it appears to share a universe with a number of other Image Comics titles. Omni-Man appeared in this month's issue of Erik Larsen's Supreme, and will face off against that series's title character in the next issue, due out next month. Invincible appeared in a recent issue of Savage Dragon.

Killing the lead character in a promo like this would usually be the tip-off that the whole thing isn't particularly credible, but Invincible has been temporary replaced recently, and there's really nothing to say another character couldn't assume his mantle if he was among those to die in an upcoming storyline.

Image Comics Teases Invincible: The Death of Everyone