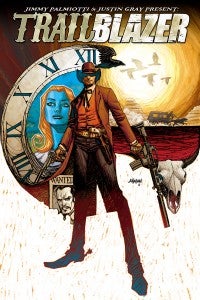 Image Comics announced today the release of a 48-page one-shot, due in stores on July 6th that is sure to be a delight for fans of not only Westerns and science fiction, but also powerful writer team-ups! Trailblazer, written by Jimmy Palmiotti (The Pro, Painkiller Jane) and Justin Gray (Hawkman, Countdown to Final Crisis) have written an exciting new title with art from Jim Daley that promises plenty of creator-owned action! Keep reading below from the official press release.

"There is nothing more fun than getting to do a bit of genre mashing," explained Palmiotti. "With TRAILBLAZER, we got to mix action with sci-fi and throw a bit of western into the mix, and the results are one hell of a fun ride. We also got to work with a fantastic crew putting this project together. The covers alone by Dave Johnson and Amanda Conner are just icing on the cake."

"Image is a vital and essential part of the comics landscape providing an alternative publishing opportunity for people looking to create new and original works," added Gray. "This is exactly why Jimmy and I wanted to work with Image to release TRAILBLAZER."

Palmiotti continued: "Working with Image Comics on this book was a dream come true for all of us and we are really proud of the end result. We hope to do more in the future."

TRAILBLAZER illustrates a modern western science fiction story about a hired killer who turns in evidence against an employer for the murder of the woman who raised him. The government must then shield their star informant by enacting Operation Trailblazer, a witness protection program that uses not only location but time travel as well in order to keep their charges safe. As the assassin adjusts to his new life in the old west, he soon finds that no matter when or where he is the future is dead set in coming back to haunt him.