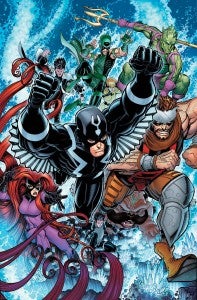 Marvel Comics have released a trailer for Inhumanity, the follow-up to the just-wrapped Infinity event written by Matt Fraction with art by Olivier Coipel and Nick Bradshaw.

You can see the trailer, along with an official description, below.

The Inhumans, widely rumored to have a movie set to be announced soon, are playing a bigger role than ever in the Marvel Universe these days; their ranks have swollen and besides Inhumanity, superstar writer Fraction is also taking on Inhuman, a story with best-selling artist Joe Madureira.

Witness as the Marvel Universe Plunges into INHUMANITY!

They have existed for centuries. Hidden from the world, they have evolved in seclusion. Now the strange race of genetically enhanced beings known has the Inhumans have been thrust to the forefront of the Marvel Universe. The cataclysmic events of INFINITY have left the Inhuman city of Attilan in ruins. It’s king – the mighty Black Bolt is missing, believed dead. Attilan’s destruction has unleashed the catalytic Terrigen Mists upon the planet Earth.

Countless thousands across the globe have powered up as new Inhumans leaving Iron Man, Thor, Captain America, Hulk, Spider-Man, Wolverine, and the rest of the Marvel Universe to react to this strange new race of super-powerful beings!

“The Inhumans are here to stay, and there are lots of them,” explains Axel Alonso, Marvel Editor In Chief, in an interview with Marvel.com. “Their emergence in the Marvel Universe –during and after Infinity– will be a game-changer. Who’s to say the planet is big enough for everyone?”

For more on INHUMANITY please visit marvel.com and join the conversation on Twitter using #Inhumanity