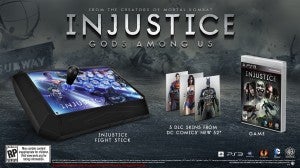 Injustice: Gods Among Us

Also available today is the new Injustice: Gods Among Us digital comic book from DC Entertainment. The comic is a prequel to the game, and it tells the story of events leading up to a new world order where heroes face each other in an epic fight to determine humanity's future. A new chapter of the weekly comic will be released every Tuesday for $.99, and three digital chapters will then be collected in print and available for sale monthly.

Injustice: Gods Among Us Release Date Set For April