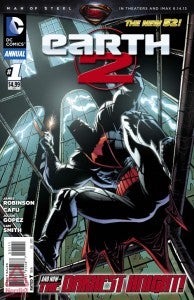 Tom Taylor, the writer of DC Comics's digital-first comic book based on the fighting game Injustice: Gods Among Us, will take over as writer of Earth 2 in October. While Injustice is sometimes criticized for being too violent and/or for its treatment of characters, particularly Superman and Lois Lane, it's DC's best-selling digital comic and has frequently been the best-selling title on ComiXology, so it's not surprising that when an opening came up on DC's other notable "alternate Earth" title, Taylor was their pick. "I'm a big fan of what James and Nicola have created so far with Earth 2, and I'm honored to be adding to this world, with its rich characters and its many mysteries," said Taylor in a statement. "Earth 2 is entering a new age, and I'm thrilled to usher in this new age with my good friend, and fellow Australian, Nicola Scott. It was good of DC Comics to give Australia our own Earth to play with. We'll try not to wreck the joint." As suggested above, series artist Nicola Scott will remain on board for the foreseeable future. "I've had so much fun working on Earth 2 with James Robinson over the last year," said Scott. "While I'm sad to see him go, I'm really looking forward to exploring the ever expanding mysteries of the title. I'm even more excited about moving forward on this journey with my great friend and fellow countryman Tom Taylor! Not only a charming guy but a great talent to boot. She continued, I can't wait for everyone to see what we have lined up!"