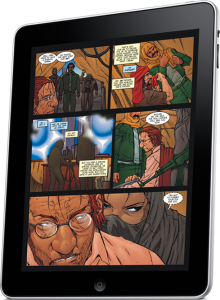 , a graphic novel by The Forgotten co-creator Evan Young (and artist Will Walber, with colors and lettering by Luiz Borges) that has been recognized as a pioneering piece of digital literature, will now be published by Alterna Comics, eschewing its previous status as a stand-alone iOS app.

This marks the end of The Carrier's availability as a standalone iPhone and iPad application, but the beginning of its availability through digital distribution channels such as ComiXology and iVerse Media.

"Part of me is sad to see The Carrier go as its own unique app," said Young, who noted that the many digital 'extras' that were fundamental to the overall experience will no longer be available. "But it's been available on the iPhone since 2009, on the iPad from the time that device launched, and has been downloaded over 13,000 times. It's time to flip the page. I'm excited to be working with Alterna now, knowing that it'll be available through broader digital distribution."

The Carrier is a globe-spanning action and espionage story that begins with a relatively simple problem: Scientist Peter Lawson wakes up in a strange hotel room with a titanium briefcase shackled to his wrist and no idea how it got there.

As he desperately tries to stay a step ahead of the international terrorists, CIA, and MI-6 agents chasing him, he realizes that he is the only person who can keep this mysterious briefcase from being delivered to Washington—and thwart the deadliest terrorist attack in human history.