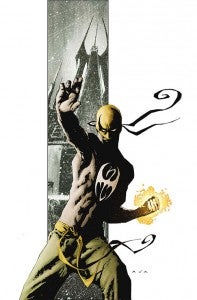 In an interview with ComicBookMovie earlier this week, Lost creator Damon Lindelof--who seems to be taking a break from feature films following the releases of Prometheus and Star Trek 2--said that it's a shame certain Marvel movies are unlikely to get a fair shake, and that he could see himself taking some of them on.

"I think I would rather do a character that not many people knew, and maybe saw as lame and couldn't carry their own movie," he said. "One character I've always loved is Iron Fist, and Matt Fraction's incredible run with him a couple of years back. I always thought that would make a really cool movie."

He says the character has a lot of promise, but likely wouldn't get any love from Marvel Studios anytime soon since there's likely concern that the audience might confuse him with Iron Man. That's the reason he imagines the property was killed the last time it went into development for an adaptation.

"He's even more fringy than Iron Man was, and also because he's called Iron Fist, they may be worried about some confusion with the Iron Man franchise, even though obviously they are very different characters," Lindelof said. "But I have to imagine that with the success of The Avengers, they are planning to give Black Widow and Hawkeye their own spin-offs, and there are many more characters on the fringe of the Marvel Universe that I feel are equally worthy, like Iron Fist."

He also proved his own geek street cred, name-dropping a fan-favorite creator who recently worked on the character.

Of course, Lindelof just forsook his long relationship with ABC Television (where he made Lost) to sign with Warner Bros. in order to have more flexibility in terms of working outside of one network. That might make it virtually impossible for the producer to do any Marvel projects--TV or movies--anytime soon, given that Marvel Studios will likely be making TV shows only for ABC, which is (like Marvel) owned by Walt Disney Studios.

There Are Countless Lokis in the MCU