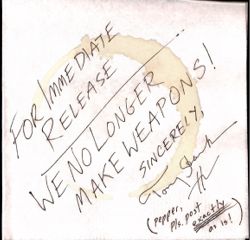 With a May 7, 2010 release date, Iron Man 2 is still over nine months away, but the online viral campaign to support the movie is already underway. A big part of the success of the original Iron Man movie was the online buzz that the movie received after the trailer premiered at Comic-Con. Director Jon Favreau is no dummy, and he has actively been catering to both comic book fans and the online audience to build the buzz for the second movie. For the last several months, Favreau has been updating twitter fans with teasers about the Iron Man 2 movie. Favreau also returned to Comic-Con in 2009 with a host of celebrities from the movie and actively acknowledged the role that Comic-Con attendees helped to play in the success of the first movie. The latest viral move to promote the Iron Man 2 movie is a website called StarkIndustriesNow.com. With so many out of work, the website has been promoted by Marvel as Stark Industries is hiring. The home page of StarkIndustriesNow.com is a simple cocktail napkin message from Tony Stark that reminds applicants, "We no longer make weapons." There is also a link on StarkIndustriesNow.com to join Stark Industries. The application includes all the typical information that you would expect to be asked for on a job application, such as name, email, address, and previous employment history. However, the application also includes some very unique questions that you might expect only from a company like Stark Industries. Applicants are asked to describe their most heroic act, as well as answer questions like "What term describes the superposition of two or more waves resulting in a new wave pattern?" It's unclear at this point exactly what applicants can expect to receive from filling out the form at StarkIndustriesNow.com. After we submitted an application, we just received back a standard, "Thank you for your interest in Stark Industries. We will contact you if your skills meet our requirements."