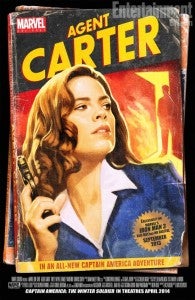 For the second time in about a month, Marvel Studios have released a clip from Agent Carter, the short film due out as part of the Iron Man 3 Blu-ray set next month. You can see the brief scene embedded below via CBM.

Following the adventures of Peggy Carter after the apparent loss of Captain America, the story sees her taking to the field without authorization after overhearing a classified message intended for her supervisor.