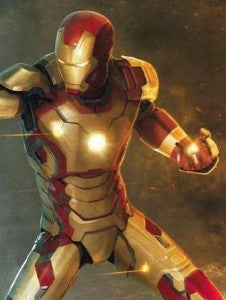 has what it describes as "what purports to be new concept art for Iron Man 3," an image of Tony Stark's new, more gold-than-not armor.

Whereas the armor itself was unveiled last week at San Diego Comic-Con International, the image making the rounds online is painted, not unlike the previous piece of Iron Man 3 art that hit the web the week before the convention. While that art appeared to give fans their first look at the way Iron Man's Extremis armor will function in the film (something we saw much more of at Comic-Con), the new shot is much more standard, just a variation on an image that we've seen a dozen times before dating back to the very first, "Mark I" armor in the desert in Iron Man.

Iron Man 3 is currently filming in North Carolina, and will be in theaters on May 3, 2013.