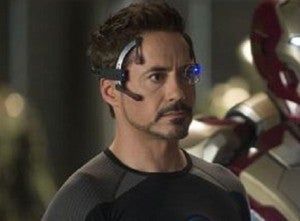 Hey, everybody! Want to watch Robert Downey, Jr. crack up a bunch of times while filming the year's biggest movie?

Your wish is our command; here's the movie's partial gag reel, just released via Yahoo! Movies from the Iron Man 3 Blu-ray, in which we get to see the film's star breaking character and laughing like he's Jimmy Kimmel on SNL.

And a little bit of Harley, too.