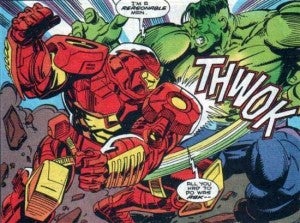 In Iron Man 3, everyone knows Tony Stark is going to have multiple suits of armor. Many of the toys have been labeled as Mark 42, while some rumors have suggested as many as forty-seven different pieces of armor.

One of the pieces of armor that appears in both the film and the toys is the deep space suit armor, which of course is rumored to connect to the Guardians of the Galaxy movie. One of the most popular variations of Iron Man armor from the Iron Man comic books is Hulkbuster armor.

While we haven’t seen any toys yet that indicate Hulkbuster armor is in Iron Man 3, there is a rumor circulating online by someone claiming that what looked like part of a prototype for Hulkbuster armor is one of Tony Stark's suits of armor under construction. Not necessarily something that factors into the Iron Man 3 story or is even identified by name, but more of a possible Easter Egg for fans.

If parts of Hulkbuster armor do make a brief appearance in Iron Man 3, then it might lend credibility to recent reports of a Planet Hulk movie and a World War Hulk plot for Avengers 3. If Tony Stark is already working on a prototype for Hulkbuster armor, then it could indicate that Marvel is laying the groundwork for Tony Stark thinking about the Hulk as a threat, which would be a good lead-in to Hulk being banished from the planet.