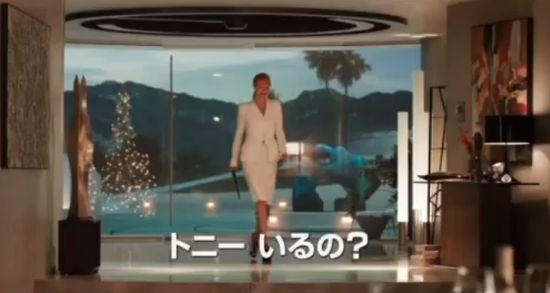 While the Star Trek Into Darkness teaser trailer has been capturing all the attention of late, a new Iron Man 3 trailer has also slipped out. Not another United States version, but a Japanese version, which does contain some different footage that hasn’t been seen before.

The Iron Man 3 Japanese trailer kicks off with a callback to The Avengers. Obviously, Marvel Studios wants to take special care to remind viewers of Iron Man’s tie in to the very successful Avengers movie.  The scene then flashes forward to Tony Stark’s Malibu mansion. Pepper Potts is walking into the mansion, while letting out a cheery, “Hi honey, I’m home.”  Tony Stark is calling pieces of his Iron Man armor to him, while responding, “Long day?” Pepper Potts replies, “You have no idea.”

Of course, things are about to get a lot worse for the pair, as helicopters fire missiles at the mansion. Then, there is The Mandarin voiceover, “Heroes there is no such thing,” as Tony Stark’s Malibu mansion tumbles into the ocean. The trailer closes up with the exploding suits of armor, Iron Man in the snow, Iron Patriot, and the broken Iron Man mask.